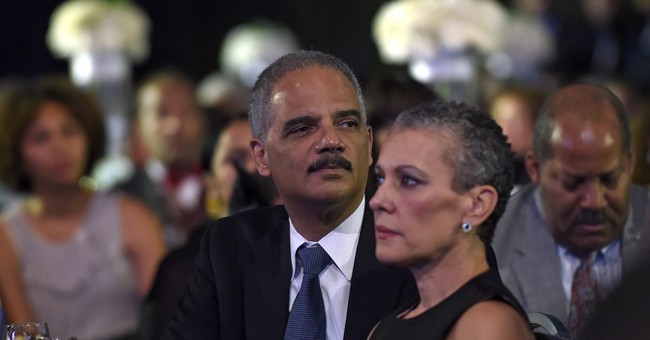 During the daily briefing at the White House Friday afternoon, Press Secretary Josh Earnest dodged questions related to Attorney General Eric Holder's role in Operation Fast and Furious after a Vaughn Index or list of documents being held under President Obama's assertion of executive privilege, was released yesterday by Judicial Watch. An initial review of the Vaughn Index shows 20 emails between Holder and his wife Sharon Malone and his mother were covered in the documents currently protected under Obama's executive privilege claim.

When asked by Fox News' Ed Henry about why those communications were covered and what was discussed, Earnest deferred all questions to the Department of Justice.

"Did the Attorney General talk about this sensitive gun running operation with his wife and is mother and that's why he [President Obama] had to invoke executive privilege?" Henry asked.

"Well Ed I'd refer you to the Department of Justice about this," Earnest said.

"It wasn't justice privilege it was executive privilege. It was invoked by the president not the attorney general right?" Henry followed up.

"I can tell you that it's the Department of Justice that can discuss those emails with you. What is clear is that this lawsuit that has been filed by Judicial Watch actually has nothing to do with the actual Fast and Furious operation, it has to do with emails and documents related to the operation," Earnest said. "This is something that has been thoroughly investigated."

Earnest went on to argue the Department of Justice has turned over an adequate amount of information and documentation about the lethal operation to Congress. He also said the White House has showed legitimate cooperation with the investigation into this matter.