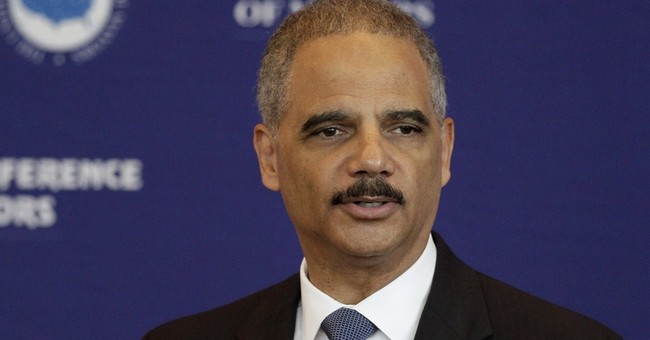 Late last night the Department of Justice complied with a court order and turned over a list to government watchdog Judicial Watch , known as a Vaughn Index, of Fast and Furious documents being held from Congress and the American people under President Obama's assertion of executive privilege. Not surprisingly, DOJ failed to fully comply with the requirements of providing a Vaughn Index.

The Vaughn index explains 15,662 documents. Typically, a Vaughn index must: (1) identify each record withheld; (2) state the statutory exemption claimed; and (3) explain how disclosure would damage the interests protected by the claimed exemption. The Vaughn index arguably fails to provide all of this required information but does provide plenty of interesting information for a public kept in the dark for years about the Fast and Furious scandal.

Regardless, the list of documents shows Obama asserted executive privilege to protect Attorney General Eric Holder's wife and to protect information showing Holder helped to craft talking points during the fallout of the scandal. What a preliminary review of Vaughn Index by Judicial Watch shows:

President Obama has asserted executive privilege over nearly 20 email communications between Holder and his spouse Sharon Malone. The administration also claims that the records are also subject to withholding under the “deliberative process” exemption. This exemption ordinarily exempts from public disclosure records that could chill internal government deliberations.

Numerous entries detail DOJ’s communications (including those of Eric Holder) concerning the White House about Fast and Furious.

The scandal required the attention of virtually every top official of the DOJ and the Bureau of Alcohol, Tobacco and Firearms (ATF). Communications to and from the United States Ambassador to Mexico about the Fast and Furious matter are also described.

Many of the records are already publicly available such as letters from Congress, press clips, and typical agency communications. Ordinarily, these records would, in whole or part, be subject to disclosure under the Freedom of Information Act. Few of the records seem to even implicate presidential decision-making and advice that might be subject to President Obama’s broad and unprecedented executive privilege claim.


Keep in mind the White House has denied any involvement with Operation Fast and Furious when it was active between 2009 and 2010. The documents described in this list indicate otherwise. Further, former White House National Security Advisor Kevin O'Reilly was in contact with former ATF Special Agent in Charge of the Phoenix Field Division William Newell about the details of the operation. Previous reporting shows at least three White House officials were aware of or involved in the operation despite denials after Congressional inquiries about the scandal.

The emails Judicial Watch describes as showing Holder being directly involved "in crafting talking points, the timing of public disclosures, and handling Congressional inquiries in the Fast and Furious matter" only further solidify his role in the cover-up of the operation. As for Holder's wife Sharon Malone being involved, this is the first time her name has come up throughout the course of the Fast and Furious scandal. His mother hasn't been mentioned before, either.

Notably, the document discloses that emails between Attorney General Holder and his wife Sharon Malone – as well as his mother – are being withheld under an extraordinary claim of executive privilege as well as a dubious claim of deliberative process privilege under the Freedom of Information Act. The “First Lady of the Justice Department” is a physician and not a government employee.


“This document provides key information about the cover-up of Fast and Furious by Attorney General Eric Holder and other high-level officials of the Obama administration. Obama’s executive privilege claims over these records are a fraud and an abuse of his office. There is no precedent for President Obama’s Nixonian assertion of executive privilege over these ordinary government agency records. Americans will be astonished that Obama asserted executive privilege over Eric Holder’s emails to his wife about Fast and Furious," Judicial Watch President Tom Fitton said in a statement. “Once again, Judicial Watch has proven itself more effective than Congress and the establishment media in providing basic oversight of this out-of-control Administration. This Fast and Furious document provides dozens of leads for further congressional, media, and even criminal investigations.”

This is the list of Fast and Furious documents Obama is hiding from you. pic.twitter.com/R3XClIESDk

After more than a year of stonewalling and a lawsuit from Judicial Watch, DOJ attorneys asked for an extension until November 3, the day before the midterm elections, to turn of the list explaining more than 15,000 documents. That request was denied.

President Obama asserted executive privilege over thousands of Fast and Furious documents just moments before Holder was held in contempt of Congress by the House Oversight Committee in June 2012. That same month, Republicans and Democrats in the House voted Holder in civil and criminal contempt of Congress. Holder is the first sitting cabinet member in U.S. history to be held in contempt of Congress. After six years at the Department of Justice, Holder submitted his resignation to President Obama in September, but will stay in his position until a new Attorney General is confirmed after the midterm elections.