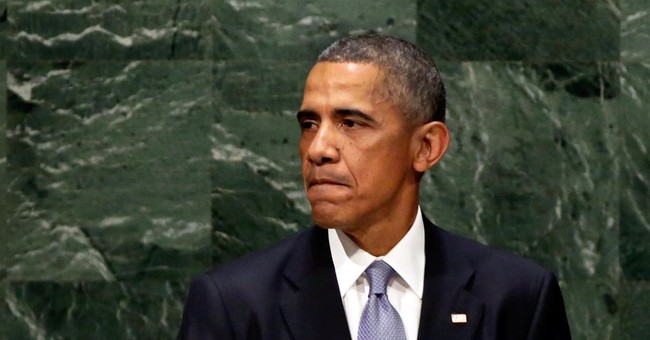 By now you're probably sick of being reminded about President Obama's promise to run the "most transparent administration in history," but unfortunately that promise continues to be broken on a regular basis and therefore, we have to keep talking about it.

Just one year after the Department of Justice was caught monitoring emails and phone lines of reporters and executives (and their parents) from a host of media outlets ranging from the Associated Press to Fox News, the White House is being accused of pressuring reporters into altering independent pool reports. More from Mediaite:

The Obama White House is once again at the center of a story on the balance between government transparency and freedom of the press.

Paul Farhi in the Washington Post writes that the press office in the current White House has on several occasions meddled with the pool reports on President Barack Obama.

Pool reports are dispatches of Obama’s public or semi-public appearances written by professional reporters who are selected on a rotating basis by the independent White House Correspondents’ Association. The reports are written throughout the day and sent to the White House press office, which in turn then distributes them to a vast email list comprised of other journalists and government officials.

As a reminder, the Obama administration has been accused by New York Times reporter David Sanger of being the "most closed, control freak administration" he's ever covered. Heck, the White House won't even allow photo journalists into events, but instead uses their own photographer to issue only the most favorable photos to the press. Associated Pres Washington Bureau Chief has accused the White House of"day-to-day" intimidation of reporters and their sources.

Day-to-day intimidation of sources is chilling. AP’s transportation reporter’s sources say that if they are caught talking to her, they will be fired. Even if they just give her facts, about safety, for example. Government press officials say their orders are to squelch anything controversial or that makes the administration look bad.

White House communication staff also has a history of screaming and swearing at reporters for covering unfavorable stories and a recent survey conducted by POLITICO Magazine shows the majority of correspondents are lied to on a regular basis.

Fifty percent of White House reporters say a White House official has lied to them and 42 percent agree that the Obama White House is "the most secretive" they've ever covered while only 20 percent disagree, according to a new survey by Politico Magazine.

The survey, based on a lengthy questionnaire filled out by 61 correspondents who cover the presidency, shows a deep skepticism toward the Obama administration and reflects a tension between the media and the president and his aides – a situation that has been customary over the years regardless of who was in the Oval Office.

The efforts to control press and intimidate sources aren't limited to the White House, but permeate throughout the Obama administration to the IRS, Department of Justice and many other agencies. It's a culture of opacity that we haven't seen before that have serious consequences on a number of different levels. Without transparency there is no accountability, which explains a lot about the situation we're in today.