Texas Allocates $1.3 Million For Law Enforcement Surge on The Border 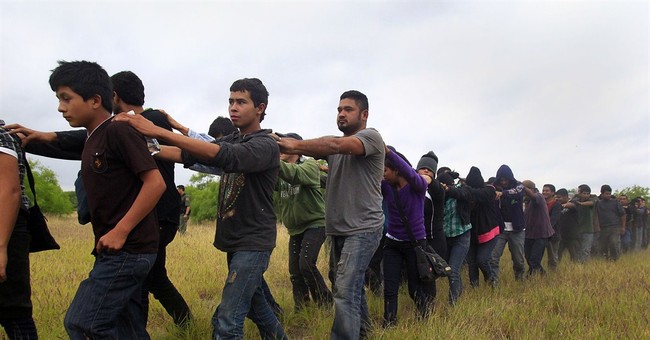 As the federal government continues to be overwhelmed by a new surge of illegal immigrants from Central America, states are taking matters into their own hands by allocating more resources for border protection.

Yesterday Texas Governor Rick Perry announced the allocation of $1.3 million for a law enforcement surge at the border with a goal of stemming the ongoing crisis. More from CBS DFW:

The state’s Republican leadership has authorized the Texas Department of Public Safety to spend about $1.3 million per week to fund operations to fight what they describe as a surge of illegal immigration along the Texas-Mexico border, the GOP leaders announced Wednesday evening.

Gov. Rick Perry, Lt. Gov. David Dewhurst and House Speaker Joe Straus said in a joint statement that spending on the “law enforcement surge operations” comes as the result of “the absence of adequate resources to secure the border.” The surge would continue until year’s end.

“Texas can’t afford to wait for Washington to act on this crisis, and we will not sit idly by while the safety and security of our citizens are threatened,” Perry said in the statement.

Arizona won't be far behind when it comes to state enforcement. Governor Jan Brewer spoke to Perry earlier this month about how to approach the situation and demanded the Obama administration stop the abhorrent practice of dropping women and children off at Phoenix area bus stops after being capture by Immigration and Customs Enforcement in Texas.

Border Patrol agents have been so overwhelmed by thousands of children who need attention and medical care, that they're been pulled off of patrolling the border and put into processing centers to help with the crisis, leaving even larger swaths of the border wide open for criminal activity.

"We have all of these juveniles so they're pulling agents out of the field to come in and babysit them basically," a source said earlier this month. "They're cancelling some of our specialty details for our crews who go out and work the mountains, calling them back in and telling them they have to work the processing center because there are so many people in there."

On a federal level, the Obama administration has allocated billions of dollars in aid for government agencies like FEMA and Health and Human Services to help manage thousands of unaccompanied children currently living in Border Patrol shelters, but the administration hasn't acted to actually stop the flow of children or their parents into the United States. Calls from lawmakers on Capitol Hill for President Obama to send the National Guard to Texas and Arizona to stem the flow of illegal immigrants are growing louder by the day.

Arizona Republican Rep. Dave Schweikert is calling for thousands of troops to be sent to states bordering Mexico to deal with the large influx of undocumented immigrants.

“The drastic increase of Unaccompanied Alien Children (UAC) being apprehended and detained by federal agents along our southwestern border is causing resources to be diverted away from other Department of Homeland Security (DHS) missions,” Schweikert said Tuesday. “This diversion is stretching the Customs and Border Patrol (CBP) thin and causing a troubling impact on our national security.”

“That is unacceptable,” he added.

The border state lawmaker introduced a bill Tuesday calling for at least 10,000 members of the National Guard to be deployed at the request of any governor of a state that shares a border with Mexico.