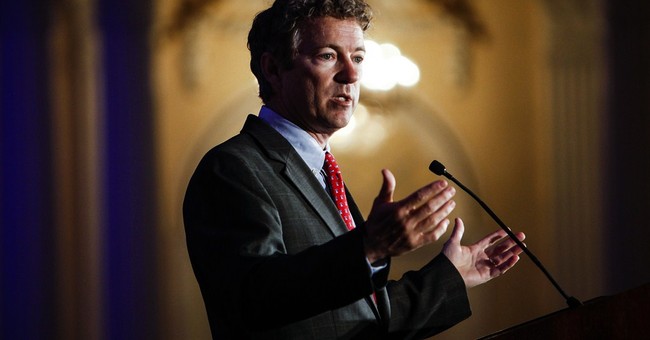 Kentucky Senator Rand Paul is making waves this week by repeatedly telling Republicans that although he thinks Voter I.D. laws are fine, Republicans and conservatives shouldn't "emphasize" them in order to avoid alienating blacks. He made the argument yesterday during an appearance on Sean Hannity's radio show. From The Right Scoop:

"I do object to overemphasizing something that's turning people off."

With all due respect to Mr. Paul, he has a lazy argument. The fact is 78 percent of the country believes Voter I.D. laws are common sense, an incredible majority. When has 78 percent of the country ever agreed on anything? Simply saying Republicans shouldn't "emphasize" Voter I.D. laws isn't good enough. I understand Paul's argument about giving people back the right to vote and the War on Drugs, but that's a completely separate issue. Further, despite the Left's constant attempts to distract, we have major occurrences of election fraud every cycle that can be easily prevented by a voter I.D. requirement. Support for Voter I.D. isn't alienating blacks, the alienation comes from Republicans failing to make a good argument for why it's a good thing and for how it actually protects the rights of voters. If Voter I.D. is being perceived incorrectly by a group of people, it's the job of Republicans to change that perception with a good argument, especially since the data, majority support and facts are on their side. Voter I.D. laws should be emphasized and backed up with solid reasoning, not shied away from in in the face of criticism and controversy.