2009 Ft. Hood Attack Survivor Wants Soldiers On Base Armed and Ready to Defend Themselves 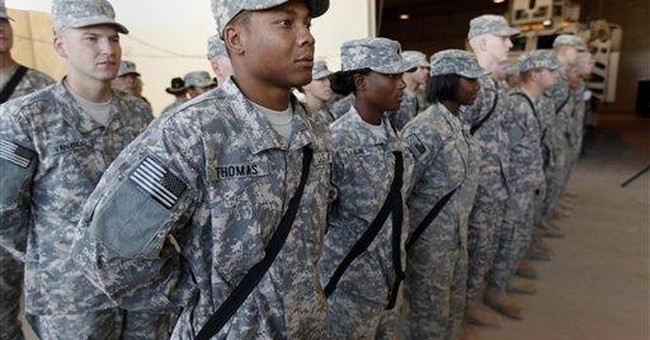 On U.S. military bases, only military police and security personnel are allowed to carry weapons. Yesterday during the second attack in five years at Ft. Hood, soldiers were forced to run from a violent and armed perpetrator killing their friends. They desperately climbed fences trying to get away until finally, after three people were killed and more than a dozen were wounded, a female military police officer confronted the man shooting with her own gun. As soon as he saw her draw her weapon, the perpetrator put his gun to his head and killed himself.

Now, survivors from the 2009 Ft. Hood attack and soldiers on base yesterday are calling for an end to the military's no weapons policy.

"When our soldiers are unarmed, they will find themselves in a situation like yesterday and in 2009," Sgt. Howard Ray, a survivor of the 2009 mass shooting in which 13 people were killed, told Fox News.

One source who was at the scene when the Fort Hood lockdown was ordered Wednesday also raised concerns about current DOD policy.

"When will they allow those who have concealed weapon permits to carry them on post?" the individual told Fox News. "We don't have a way to protect ourselves. ... We are all hostages on post."

Back in 2009 after the Ft. Hood shooting, legislation was introduced to end the policy, but it quickly died in the House.

Current Defense Department policy states, "The authorization to carry firearms shall be issued only to qualified personnel when there is a reasonable expectation that life or DoD assets will be jeopardized if firearms are not carried. Evaluation of the necessity to carry a firearm shall be made considering this expectation weighed against the possible consequences of accidental or indiscriminate use of firearms. DoD personnel regularly engaged in law enforcement or security duties shall be armed."

It is unconscionable that as a policy all of our soldiers are "qualified" to carry a firearm overseas and on the battle field, but are left as sitting ducks when they are on their bases. How many people have to die defenseless on post until there is "a reasonable expectation that life or DoD assets will be jeopardized if firearms are not carried?" Texas Rep. Michael McCaul wants a change.

"We need to harden our military bases so this can't happen, and one possible way to do that is to allow our veterans and active-duty military ... to carry weapons," he told Fox News. "I guarantee if they had ... they could have stopped this guy almost immediately."

As a reminder, the gun free zone policy on our military bases dates back to George H.W. Bush and was further endorsed by Bill Clinton.

It appears this “gun-free zone” type policy can actually be traced back to Department of Defense (DoD) Directive 5210.56, signed into effect in February 1992 by Donald J. Atwood, deputy secretary of defense under President George H.W. Bush.

The Directive was reissued in April 2011, two years after the first Ft. Attack, under President Obama's watch by Deputy Secretary of Defense William J. Lynn III.