Showdown Over Ground Troops: McCain Says Impeachment On The Table For Obama 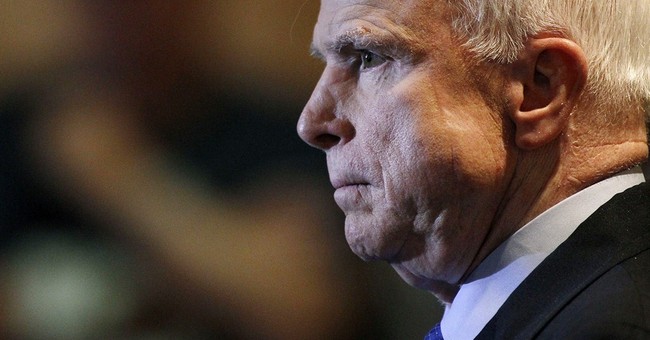 Republican Senator John McCain has been the war drum over Syria for months. He's argued the United States shouldn't simply take limited military action against the Assad regime, but rather should force regime change. He's been an advocate for Syrian rebels, begging President Obama to arm them with high powered artillery. He's even called for a no fly zone. But boots on the ground? That's an impeachable offense.

Barack Obama could face impeachment if he decides to put “boots on the ground” in Syria.

The Republican Arizona senator made the comments to KFYI Thursday following a spirited town hall in Phoenix that focused on Syria.

“The fact is [Syrian President] Bashar Assad has massacred 100,000 people. The conflict is spreading … The Russians are all in, the Iranians are all in, and it’s an unfair fight,” McCain told KFYI’s Mike Broomhead. “And no one wants American boots on the ground. Nor will there be American boots on the ground because there would be an impeachment of the president if they did that.”

McCain's word would mean something if the force authorization resolution he voted for didn't leave tons of wiggle room for troops on the ground.

“What could possibly be the meaning of ‘limited and tailored?’ I doubt if I’ve ever seen the word ‘tailored’ in a bill,” said Mr. Fisher, a veteran of four decades of studying legislation. “Even if the ‘intent’ of Congress is a limited war, war has its own momentum.”

The Daily Mail reported earlier this week it will take an estimated 75,000 ground troops to secure chemical weapons in Syria. That's 12,000 more troops than the United States had on the ground at the beginning of the Iraq war in 2003.