How To Keep Businesses From Leaving the U.S.: Dave Camp on Tax Reform Plan 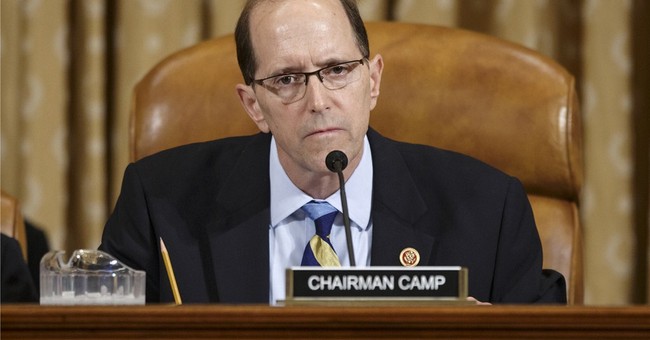 Monday, I reported that yet another American corporation, Medtronic, has chosen to move its headquarters abroad to avoid high tax rates. I ended the article by inquiring, “There is no denying that our federal tax code needs a major overhaul. The million dollar question is how?” Rep. Dave Camp (R-MI), Chairman of the Ways and Means Committee, has proposed a solution.

Chairman Camp spoke yesterday at the Heritage Foundation about the development of his comprehensive Congressional tax reform plan known as the “Tax Reform Act of 2014.” The plan aims to create a more effective and efficient system by lowering rates across the board and collapsing the tax code into two brackets of 10 percent and 25 percent for virtually all taxable income. The corporate tax rate would too be reduced from its current 35 percent down to 25 percent.

This, Camp says, will allow small and large businesses alike to expand their operations, hire new workers, increase benefits and increase take-home pay. He stresses that Congress needs to move toward implementing permanent policies and move away from legislating short term extensions that make it difficult for families and businesses to plan for the future.

An overwhelming majority of the independent, nonpartisan analysts who have examined this bill view it favorably. Analysis has found that the plan could increase the average family’s post-tax income by 2.3 percent, create $700 billion in additional federal revenue and increase the economy by $3.4 trillion, which is over 20 percent.

Rep. Camp’s proposal is the the first tax overhaul America has seen since 1986 and the first time the international tax system has been addressed in more than 50 years. With the launch of www.taxreform.gov, Camp has garnered over 14,000 comments from American citizens expressing the need for tax reform. He has held numerous hearings considering every aspect of our broken tax system and has formed 11 bipartisan working groups to tackle specific policies.

In light of Medtronic’s announcement Friday to relocate to Dublin, I asked Rep. Camp just how effective this tax code overhaul would be in encouraging American companies to reverse decisions to move abroad. I noted that in Medtronic’s case, Ireland’s 12.5 percent tax rate is still significantly lower than 25 percent.

That is the testimony that we’ve gotten from most business leaders. If they can get to 25 percent, the incentive to move [overseas] just becomes a lot less, it’s not as worth it. But this is exactly the issue that we’re going to have to deal with.

We’re hearing about [Medtronic] and other companies in the last few weeks and there are many analysts and advisors that are urging companies to find partners to do this with, so it is a very serious issue. I do think that if we can get to 25 percent, which I said is the average of the OECD (Organisation for Economic Co-Operation and Development) nations, we would go a long way to making that less attractive and that’s something we need to do.

Obviously on the international side, we do some changes in terms of what we call the carrot-and-stick approach to intellectual property and intangibles and come up with the 15 percent rate, so that wherever that is located, whether that is in the U.S., there’s a carrot of keeping that within the U.S. at a 15 percent rate. And then overseas, you would be paying a 15 percent rate depending on the jurisdiction you’re in. That actually makes some of the reasons much easier so when you look at the draft as a whole, there are a number of areas where we make progress on that issue but those are the two key ones.

In other words, a number of companies have testified that a 25 percent tax rate would be low enough to keep their headquarters within U.S. borders. This is the incentive in the “carrot-and-stick” approach. Coupled with the 15 percent rate on all foreign income from international property rights and intangible assets such as patents and licenses, American businesses would be more competitive in the global market by remaining in the U.S.

The House has already voted to make a series of these provisions permanent and the Committee has acted on several others. Chairman Camp has a lot to accomplish by the end of the year as he plans to retire after this term. Camp has served in the House of Representatives for 24 years.

UPDATE: Watch the speech in its entirety here: