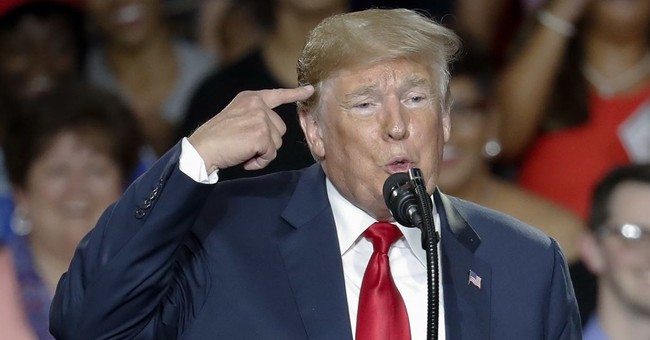 This one's been rattling around in my brain ever since I first heard the idea floated in a private conversation over the summer -- then the political game theory really kicked into high gear after Politico wrote about this line of argument last week.  With Democrats favored to win back control of the House in November (I think this is an insightful point about how elections tend to break), the question is relatively straightforward, if a bit counterintuitive: Would that outcome actually benefit the Republican president's re-election chances?  "Winning by losing" generally isn't a terrific strategy in politics, but this notion isn't entirely crazy:

There’s a new way of demonstrating loyalty to Donald Trump and his Republican Party: Claiming that the president could not only survive an impeachment effort, but that it would guarantee his victory in 2020. The idea gaining currency on the right is that Trump can be Bill Clinton, not Richard Nixon. It depends on a delicate political calculation — that a Republican-held Senate would never follow a Democratic House and vote to remove Trump, and that voters tired of the long-running Russia scandal will, as they did in the late 1990s with Clinton’s Monica Lewinsky scandal, want to move on...

In interviews, more than a dozen Republican politicians, activists and consultants — including some current and former Trump campaign aides with direct lines to the president — said they are increasingly convinced a Democratic House victory in the midterms and subsequent impeachment push would backfire and ultimately help the president in 2020...It dovetails with the growing conviction in Republican circles that the president could use congressional gridlock under a Democratic House majority as a personal battering ram, offering it up as the picture of Washington intransigence as he vies for reelection — rather than having to answer for the ongoing inability of a slim and fractious Republican majority to move a comprehensive agenda through the Hill.

I don't really buy into the initial framing of this story; namely, that only Trump sycophants are pondering whether a limited Democratic victory in November could redound to Trump's advantage in 2020.  Sure, some people may be preemptively spinning away an anticipated defeat for the party, or preparing a talking point to soften the blow, but there's a logical component to this analysis that has nothing to do with damage control.  A few thoughts:

(1) If you're on Team Trump, perhaps the most unappealing byproduct of a Democratic House takeover would be the new majority's power to launch investigations into the executive branch, replete with subpoena issuance prerogatives.  The pro-Trump narrative advanced in the Politico story relies on Democrats pressing too far and pursuing an unpopular impeachment gambit (this is not an unfounded possibility, incidentally). But what if Democrats simply seek to hobble the administration by bombarding it with endless probes, slowly bleeding it dry?  The latter play may be the smarter one, but the lefty base may demand more.

(2) In the plausible (see below) but less likely event that the GOP manages to maintain its House majority, it will almost certainly do so by the skin of its teeth.  Democrats are virtually guaranteed to cut into the Republican advantage one way or the other, resulting in a perilously thin GOP edge...at best.  Such a fractional majority may not be a functional majority in practice; recall how Republicans have at times struggled to pass bills in recent months and years even with a significantly larger margin for error.  One of the underlying assumptions of the "winning by losing" theory is that a weakened Republican House would not be able to advance very much meaningful conservative legislation in 2019 or 2020 anyway, thus reducing the blow of that missed opportunity.

(3) All of this hinges on the gamble that Democrats' gains would be relatively limited in the House (not an historically-punishing setback that could require multiple cycles from which to recover) and that Republicans would hold the Senate.  Forget preventing impeachment; the most important missions for a GOP Senate under this scenario would be blocking the worst legislation that may emerge from a Democrat-held lower chamber, while ensuring that the judicial confirmation merry-go-round keeps churning along, unaffected by the House.  The idea would be that Trump could assail House Democrats over DC dysfunction, even while racking up legacy wins in the judiciary-reshaping column.

Because legislative gridlock is a fairly likely outcome of this midterm cycle no matter who wins, the theory goes, it's far better for Trump to have a scapegoat to hammer when channeling inevitable voter frustration.  Such frustrations would probably exist under reduced Republican majorities anyway, so it's preferable to let Trump train his rhetorical fire against the opposing party, rather than ripping his own team leading into his re-election campaign. It's conceivable that a combination of quasi-toothless Democratic Congressional overreach, stinging Trump complaints against a "do-nothing Congress" (a la Harry Truman), a strong economy, and an alienating, left-wing opponent could grease the skids for Trump win secure four more years in the White House.

(4) An interesting wrinkle, via Allahpundit: "The strongest case that Trump might benefit from a Democratic House is one not seen in the Politico piece because it’s not one that conservative Trump cheerleaders want to consider. Namely, it’d give him a chance to pass some centrist compromise packages that might be more agreeable to him personally and to many in his base than the usual Ryan/McConnell conservative dogma is. Because Trump’s support is so strong among his devout fans, he could deliver some (emphasis: some) Republican backing for bills that a GOP president with a thinner base couldn’t. Infrastructure, entitlements, even immigration — he could make some deals and notch a few, ahem, 'wins.' Ironically, it wouldn’t be Trump himself who’s the main stumbling block to that; it would be House Democrats, who’d risk enraging their own Resistance base by compromising with him on anything."

Again, I'm not sure I can ever fully embrace a plan in which a lower-stakes defeat is part of a political bank-shot to ultimate victory, but this whole theory strikes me as more serious and compelling than first meets the eye.  I'll leave you with two data points -- the first of which projects a narrow Democratic win, which would align neatly with the hypothetical laid out above.

New CBS polling estimates Democrats winning 222 House seats (thus control). That would give them a 9-vote margin, the smallest governing majority for either party since 2000 election when House was split between 221 Rs and 212 Ds. https://t.co/81tgaIT82s

Trump approval rating sits at 48% approve, 45% disapprove in swing counties where Trump/Clinton margin was within 10 pts in 2016 election, via new Monmouth poll.

If Trump is above water in swing counties, could rumors of Republicans' 2018 demise be greatly exaggerated (worrisome special election trends notwithstanding)?