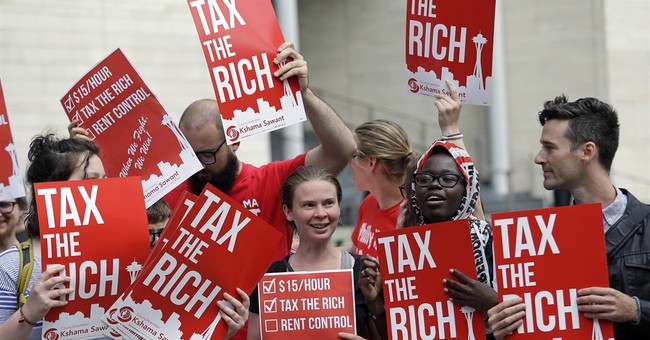 On tax day this week, many on the Left sought to downplay the positive impact of the new tax reform law -- opposed by every Democrat in Congress -- by yet again casting it as a giveaway to wealthy people and corporate fat cats.  Liberals' dishonest rhetoric about the law was helpful in the short term, initially driving down public support for the GOP proposal during the debate over its passage. But reality has intervened in big ways and small, leading to a substantial surge in the law's popularity and the president's handling of the issue.  As we mentioned yesterday, the Congressional Budget Office's new report enhances America's employment projections by 2.6 million jobs, more than a million of which CBO directly attributes to tax reform.  If Democrats want to take CBO's deficit projections as gospel (I addressed the debt issue here), they can't simply ignore this optimistic component of the same study.

To underscore this point, we highlighted the latest good news from Kroger grocery chain, which joined the list of hundreds of American companies that have reinvested their tax reform benefits into helping their employees and/or expanding their businesses. Because so many Democratic attacks focus on the corporate tax cuts, it's important to repeat -- over and over again -- that it's precisely those cuts that have led to a parade of bonuses, wage increases, benefit enhancements and hiring announcements.  Positive news for American business owners, including small business owners and manufacturers, has translated into good news for American workers.  And don't lose sight of the fact that the previous US corporate tax rate was inefficient and very uncompetitive.  All of those considerations come in addition to the individual and family tax cuts that are actively improving the bottom lines of nearly all US households.  Still, the typical class warfare arguments are being trotted out, and they require a response.  Here's one example:

A number of conservatives noted that a minuscule percentage of households earning less than $12,000 pay any taxes at all (hold that thought) -- but there's another point to be made here, even if we take tweets like this at face value:  The lowest income cohort receives a tax cut under tax reform.  We were told that the Republican tax plan wouldn't help non-rich Americans, and that it would constitute a "massive attack" on the middle class, many of whom would see tax increases.  None of that was true.  Even the supposedly damning example used in the tweet above to denigrate the new law actually concedes that every single income group is getting a lower tax burden.  Which is exactly what we argued would be the case, as we fought against the Left's disinformation campaign late last year.

Also, imagine how many dollars you must be forking over to Uncle Sam if your tax cut is $190,000.  On that score, the Left's "fair share" sophistry and scare tactics (which are part of their playbook because they're effective) often deliberately overlook two important facts: First, most Americans' idea of what "fair" taxation rates should look like does not align with the preferred definition of the political Left, and second, "the rich" are already paying a disproportionately gigantic percentage of the total federal income tax tab:

CBO data further demonstrates that the top quintile (households earning roughly $135,000 annually and above) pay approximately 70 percent of all federal taxes.  This far outstrips the slice of the total income pie that they earn.  This is extraordinary, if you think about it -- and it really takes the wind out of the sails of demagogues who find political utility in demonizing "the rich" as oppressive, pampered freeloaders.  For what it's worth, Gallup finds that a majority of Americans now believe that middle income earners pay their fair share of taxes, up 11 points in one year.  That's not a coincidence  If Democrats push for full repeal, as Nancy Pelosi has suggested, nearly 90 percent of taxpayers (including nearly the entire middle class) will get slammed with significant tax increases.  And if businesses and "the rich" (a category that entails many small businesses) are targeted in a partial repeal scheme, many of the recent hard-fought economic and employment gains will be reversed.  On many issues, Democrats have basically one idea: More taxes and more spending, and they'll be darned if they let undeniable progress dissuade they from trying to confiscate more of people's earnings:

.@WhipHoyer: Democrats Will Look to Raise Taxes Once Back in Power https://t.co/ndhyTmEqPM