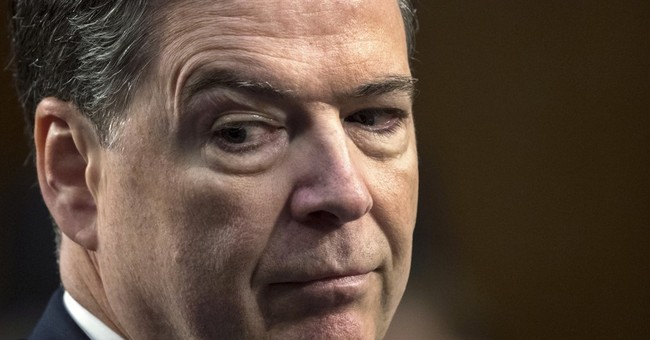 As Katie highlighted yesterday, a top FBI investigator working on Robert Mueller's special counsel probe into Russia's 2016 election meddling was yanked off of the investigation earlier this year after it was revealed internally that he'd sent anti-Trump texts to the woman with whom he was having an affair.  His dismissal was publicly reported months ago, but the reason behind it didn't emerge until this past weekend.  Peter Strzok wasn't just a bit player in this whole saga; his fingerprints are all over it.  He was the official who signed the paperwork to formally launch the Russia investigation, and we're now learning that he was also the official who personally intervened to soften the verbiage then-FBI Director James Comey used to condemn Hillary Clinton's improper and national security-compromising email scheme -- via CNN:

A former top counterintelligence expert at the FBI, now at the center of a political uproar for exchanging private messages that appeared to mock President Donald Trump, changed a key phrase in former FBI Director James Comey's description of how former secretary of state Hillary Clinton handled classified information, according to US officials familiar with the matter. Electronic records show Peter Strzok, who led the investigation of Hillary Clinton's private email server as the No. 2 official in the counterintelligence division, changed Comey's earlier draft language describing Clinton's actions as "grossly negligent" to "extremely careless," the sources said...The shift from "grossly negligent" to "extremely careless," which may appear pedestrian at first glance, reflected a decision by the FBI that could have had potentially significant legal implications, as the federal law governing the mishandling of classified material establishes criminal penalties for "gross negligence."

...The news of Strzok's direct role in the statement that ultimately cleared the former Democratic presidential candidate of criminal wrongdoing, now combined with the fact that he was dismissed from special counsel Robert Mueller's team after exchanging private messages with an FBI lawyer that could be seen as favoring Clinton politically, may give ammunition to those seeking ways to discredit Mueller's Russia investigation.

The Washington Post notes that Strzok's "politically charged texts" with his girlfriend weren't just "disparaging [of] President Trump," but also supportive of Hillary Clinton.  We now know that the man who made the decision to replace a damaging but accurate characterization of Clinton's conduct (which originally included a legally-loaded term) with more whitewashed language was privately a Trump critic and Clinton backer.   This calls into question whether justice was truly blind throughout that entire process.  After all, Comey's explanation for why Clinton supposedly lacked criminal intent, and therefore wouldn't be charged, was always tortured and unconvincing.  But wait, there's more.  Strzok was also the FBI agent who conducted the interview with Michael Flynn in which Trump's fired National Security Adviser famously lied, resulting in the charges filed against him by Mueller (with the threat of additional counts being used as leverage to get Flynn to flip):

FBI agent Peter Strzok was one of two FBI agents who interviewed Flynn, which took place on Jan. 24, at the White House, said several sources. The other FBI special agent, who interviewed Flynn, is described by sources as a field supervisor in the “Russian Squad, at the FBI’s Washington Field Office,” according to a former intelligence official, with knowledge of the interview…The former U.S. intelligence official told this reporter, “with the recent revelation that Strzok was removed from the Special Counsel investigation for making anti-Trump text messages it seems likely that the accuracy and veracity of the 302 of Flynn’s interview as a whole should be reviewed and called into question.”...The former U.S. intelligence official questioned, “how logical is it that Flynn is being charged for lying to an agent whose character and neutrality was called into question by the Special Counsel.”

There was another FBI agent present for that interview who can confirm what was said that day, so it's entirely possible -- if not quite probable -- that Flynn lied, just like Strzok says he did. But Mueller now has an escalating perception problem about the independence of his investigation, which has also bled over into the FBI's exoneration of Hillary and which was already stacked with Democrats. Allahpundit thinks these combined factors could give Trump the excuse he's been searching for to grant a blanket pardon to Flynn:

Trump wants to pardon Flynn, not just for lying to the FBI but for everything, yet he knows it’ll look bad unless he can come up with some sort of fig leaf to justify it. Strzok’s bias is the fig leaf. The interview was the product of illicit political bias, therefore all of the information that came out of it was illicitly obtained, therefore all of Mueller’s leverage over Flynn was also illicitly obtained, therefore Flynn must be pardoned for all offenses. Trump’s going to claim that all of the criminal fruit of this poisonous tree is legally inedible. In all probability Hannity was pointed in this direction by the White House or its allies to get him to start beating the drum on Fox for Flynn to be pardoned. Once there’s a Republican groundswell, Trump will act. Granted, if Flynn is pardoned, that means he can be forced to testify by Mueller with no right to plead the Fifth and refuse to answer. But we’ve already crossed that bridge by Flynn agreeing to cooperate with the special counsel. He’s going to testify against people either way.

"Fig leaf" is spot on.  Flynn didn't merely lie to the FBI, which is serious enough.  He's badly compromised and clearly committed other crimes, for which Mueller is giving him a pass, in exchange for testimony.  For Trump to use the Strzok controversy (which admittedly stinks) as a pretext to gift Flynn with a sweeping pardon would also stink of corruption.  A purchased silence.  If Trump has nothing to hide on alleged "collusion," he'll let this process play itself out, and resist the urge to short-circuit it.  That said, Mueller now has a metastasizing credibility problem within his own house -- as does James Comey, who still needs to testify under oath about why he started drafting an exculpatory statement clearing Hillary Clinton before key interviews (including with her) had taken place.  It's time to add more questions to the list of issues for which he should answer.  For instance, did he know that the man who made a critical alteration to his assessment of Clinton's behavior was a partisan Clinton supporter?  It looks really, really bad.  On that note, I'll leave you with this:

NEW: Embattled FBI supervisor Peter Strzok also conducted the interviews with Huma Abedin and Cheryl Mills, in which they falsely claimed they didn't know about Hillary's email server when she was Secretary of State. https://t.co/EZ8B1rG6oq @dailycaller

Parting Question, based on that story, which you should read: Strzok interviewed Cheryl Mills and Huma Abedin during the Clinton email probe, and they lied to him about when they were aware of their boss' server scheme. Why weren't they charged with lying to the FBI? That question is more pertinent than ever, in the context of the Flynn matter.