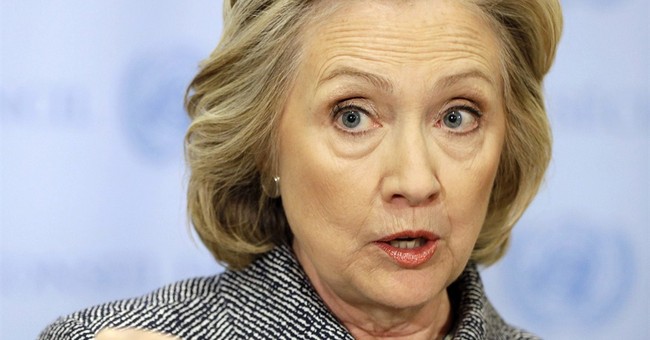 The official Hillary line on the email imbroglio is that she didn't really do anything wrong (false), and more importantly, nobody cares.  Here's Nancy Pelosi doing her part to advance that narrative by trivializing the scandal as just one more silly Republican obsession:

Pelosi on Clinton emails: I think we're just going to see the ongoing attempt to investigate Hillary Clinton, be it her hair or her emails


Get it? Asking about a secret, stunningly-insecure email server set up in Hillary's basement for the explicit purpose of thwarting transparency efforts and ducking accountability (with tens of thousands of messages being permanently deleted) is akin to asking about her hairstyle. Move along, wingnuts, there's nothing to see here.  But via America Rising, here's an intriguing snippet from a pro-Hillary focus group, followed by Mark Halperin's analysis:


"Clinton defenders are saying 'no one's paying attention, and no one cares.' The people you saw there were mostly strong Hillary Clinton supporters...their knowledge of, and intense concern about, what she did with her emails was quite striking. They said she should have an independent person look at her server -- what she did was not just politically bad, they're really troubled [by it]."


A majority of Americans polled by CNN called the email issue "serious," which it undoubtedly is.  Officials at the National Archives is demanding answers, as new details continue to emerge.  Of course, the same CNN survey showed HRC coasting by double digits over every major potential Republican challenger, so it seems as though a lot of Americans are 'Ready For Hillary,' no matter how deceitful, reckless and corrupt she may be.  A fresh Reuters poll, however, shows a more precipitous drop in Mrs. Clinton's support...among Democrats:

Democrats’ support is softening for Hillary Clinton, their party’s presumed 2016 presidential front-runner, with many favoring an independent review of her personal email use when she was secretary of state. Support for Clinton's candidacy has dropped about 15 percentage points since mid-February among Democrats, with as few as 45 percent saying they would support her in the last week, according to a Reuters/Ipsos tracking poll. Support from Democrats likely to vote in the party nominating contests has dropped only slightly less, to a low in the mid-50s over the same period. Even Democrats who said they were not personally swayed one way or another by the email flap said that Clinton could fare worse because of it, if and when she launches her presidential campaign...


Interestingly, nearly half of Democrats polled said Hillary should heed Republican demands and turn over her secret server to an independent third party for a thorough review. So far, she's adamantly opposed such a move, preferring to ask voters to just take her at her word that the 30,000 emails her lawyers deleted had nothing do with her official business -- which, of course, she exclusively conducted through that account, in violation of the rules. "Trust us," is hard to swallow from the Clintons, generally, but it's especially unsatisfactory in light of the fact that they've already changed their story on this specific issue.  The GOP would be wise to focus their public comments on (a) heavily pressuring Hillary to release the private server, and (b) highlighting the astounding national security implications of her reckless and self-interested secrecy.  That being said, how many of the Reuters respondents will rally 'round the Blue Flag once the general election rolls around?  I'd guess virtually all of them.  Getting excited about mediocre Democratic support for Hillary is fool's gold.  Yes, the drip, drip, drip of her improprieties and failures will have an impact, but I'm still not convinced that almost anything will be enough to overcome the obnoxious First! Woman! President! identity politics-based campaign she's going to run.  I expanded on this point earlier in the week on Fox News' Outnumbered: