Warren: "I Am Not Running For President" 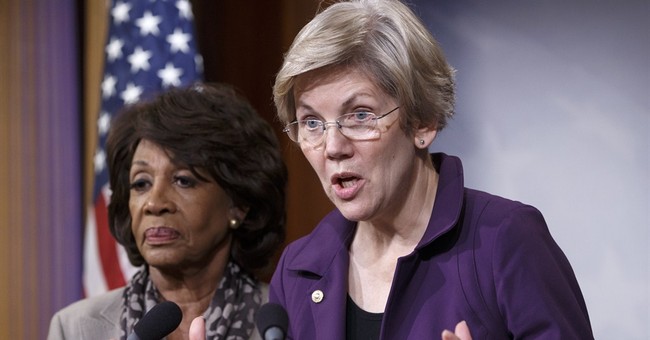 Elizabeth Warren is a Democratic Senator from Massachusetts, a fraudulent Native American, and the Left's political crush du jour, who's been dubbed by some as liberals' version of Ted Cruz.  (Oddly, her recent threats to buck her party's leadership and shut down the government didn't garner the sort of apocalyptic coverage that Cruz's endeavors have.  She now calls the whole episode a "warning shot," suggesting there's more fighting for principle to come).  In spite of whispers and terrible music video tributes, Warren has consistently denied that she is running for president, repeating her answer in an interview with NPR:

Inskeep: Senator Warren, as you must know, that even as you were fighting over this in the Senate, there was a group called Ready for Warren that wants you to run for president, that released a letter signed by more than 300 people who describe themselves as former Obama campaign workers and staffers and aides. They want you to run. What do you say to them?

Warren: I'm, I'm not running for president. That's not what we're doing. We had a really important fight in the United States Congress just this past week. And I'm putting all my energy into that fight and to what happens after this.

Inskeep: Would you tell these independent groups, "Give it up!" You're just never going to run.

Warren: I told them, "I'm not running for president."

Inskeep: You're putting that in the present tense, though. Are you never going to run?

Warren: I am not running for president.

Inskeep: You're not putting a "never" on that.

Warren: I am not running for president. You want me to put an exclamation point at the end?


Both the Washington Post and Weekly Standard picked up on Warren's use of the present tense in her responses. She asserted that she's not currently running for president four times in about one minute, but didn't engage the issue of whether that might change at some point in the future, possibly soon.  If she does harbor presidential ambitions, 2016 might her best, if not only, shot.  Warren is 65 years old, so if she keeps her hat out of the ring this time around, her next conceivable opportunity to run wouldn't come until 2020, when she'd be 71.  But let's say Hillary Clinton runs and wins in 2016 (not an unreasonable hypothetical at this stage); there's next to zero chance that Warren would challenge a sitting Democratic president -- especially the First Woman President.  Is she willing to wait a full decade and seek the Oval Office in her mid-70's?  The current mood of the Democratic base -- bitter about getting plastered in the midterms, losing interest in Obama, and mistrustful of Hillary Clinton's wealth, Wall Street ties and perceived hawkishness -- suggests that a strong candidacy from the Left could shake up the 2016 primary.  Most people have anticipated a Hillary coronation, barely impacted by pro forma opposition.  But might that equation change if there's another, more liberal, queen in the offing?  Chris Cillizza and Aaron Blake of The Fix suggest that Team Hillary might want to consider shifting their announcement timeline forward to stamp out any nascent Warren boomlet before it grows into something more threatening.  After all, the thinking goes, we all remember what happened last time Hillary's inevitability was derailed by a flashy freshman Senator.  But Ed Morrissey throws a dash of cold water on the Warren/Obama analogy:


Elizabeth Warren isn’t Barack Obama, and this isn’t 2006. Voters soundly rejected a progressive President and his progressive allies in the midterm election, the exact opposite from what happened in George W. Bush’s sixth-year midterm. Warren isn’t someone who laid the groundwork for a general election by appealing to the center and making herself the champion of “post-partisan” politics, no matter how misleading that later turned out to be. She’s not the candidate of youth, either, in the way Obama was; Warren is only two years younger than Hillary Clinton, and significantly older than almost all of the Republican field expected to challenge for the other major-party nomination.


Obama catapulted to national prominence after his non-ideological, "no red states, no blue states" 2004 DNC keynote address.  He ran as a hopeful, forward-looking, pragmatic outsider in 2008, successfully disguising his deep ideological leftism, with the media's assistance.  He played the part very well.  Liz Warren's brand of politics is in-your-face aggressive and grating.  She delivered the original "you didn't build that" screed, punctuating her wide-eyed harangue with sharp gesticulating:


She is not warm.  She is not inviting.  She's an intense, unreformed Statist.  Liberals love her, but she'd be a much, much harder sell for a lot of people. But she very well could create all sorts of headaches for the Clinton machine.  Which is probably why they, more than anyone else, are keenly interested to know whether or not Warren is deliberately clouding her real intentions behind a veneer of unequivocal, present-tense denials.  Parting thought: Imagine a Warren vs. Cruz 2016 campaign, for all the marbles.  Imagine it.