Obama: Future Presidents Can 'Absolutely Not' Replicate My Power Grab on Other Issues 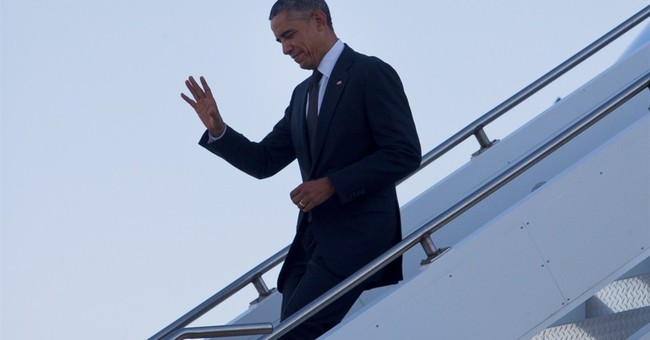 
GS: So you don't think it would be legitimate for a future president to make that argument?

BO: With respect to taxes?


Not included in that mini-transcript is Obama's largely unresponsive word soup of a soliloquy, which veered incoherently from one talking point to the next, but never addressed the actual question at hand.  It took a follow-up from Stephanopoulos to pry an answer out of the president, which came in the unpersuasive form of flat assertion:  Yes, I can do this on immigration; no, a Republican couldn't do this on something like taxes.  Does anyone doubt that Obama would happily switch his stance on this question from "absolutely not" to "absolutely!" if the political incentives were different?  He spent the last few years citing the law and the Constitution to rule out the executive amnesty he's now ordered.  He spent his time in the Senate and running for president inveighing against President Bush's expansionist vision of executive authority, only to surpass Bush's alleged transgressions many times over once elected.  This is someone who does whatever the political moment demands, remorselessly shunting aside pesky details.  Allahpundit notes how some lefties are casting about for reasons that applying the Obama Precedent to tax enforcement, for instance, would be totally different and unacceptable.  He links to Sean Trende's smart piece that makes quick work of their premise:

[A Vox writer's] first scenario involves President Rick Perry declaring that there would be a 17 percent flat tax and instructing the Justice Department to defer all prosecutions. He cites former Solicitor General Walter Dellinger’s response: “no president can relieve any one American of a statutory obligation to pay taxes. The next president can come collecting– and interest and penalties will be accruing until he or she does.” First, Obama’s action suffers from the same shortcoming. In theory, nothing legal stops a future Republican president from using the list of individuals signed up for work permits as a sort of “illegal immigrant database” to help focus deportations. In fact, the statute of limitations for most audits is three years, with a practical limit of less than that.

Also, just as practical limitations would probably prevent a future GOP president from deporting these individuals, so too would a future Democratic president find it difficult to collect on millions of three-year-old tax bills. But more importantly, when President Perry walks out the door, he can issue a pardon for everyone who avoided taxes during his presidency. Prokop just sort of breezes past this possibility, asserting that it would provoke a massive public outrage. But what would an outgoing President Perry care? He would do so after the next presidential election. Moreover, millions of Americans would have enjoyed substantially lower tax rates for either four or eight years. The incoming president would have a hard time reverting to a 28 percent middle-class tax rate...


Yup.  The Obama Precedent means that presidents can use Congressional inaction as a fig leaf to effectively rewrite laws (even "temporarily") via "enforcement discretion," or whatever.  That standard could apply to a whole host of issues.  The "absolutely not" answer rings especially hollow coming from the eponymous author of the Obama Precedent.  Click through for AP's point that if anything, Obama's 'Congressional gridlock' rationale is significantly more applicable to tax policy than immigration.  I'll leave you with an excerpt from Ross Douthat's sharp and succinct piece on Obama's transformation into an imperial president:

So how did we get from there to here? How did the man who was supposed to tame the imperial presidency become, in certain ways, more imperial than his predecessor? The scope of Obama’s moves can be debated, but that basic imperial reality is clear. Even as he has maintained much of the Bush-era national security architecture, this president has been more willing to launch military operations without congressional approval; more willing to trade in assassination and deal death even to American citizens; and more aggressive in his war on leakers, whistle-blowers and journalists. At the same time, he has been much more aggressive than Bush in his use of executive power to pursue major domestic policy goals — on education, climate change, health care and now most sweepingly on immigration...Confronted with [limiting] realities, Clinton pivoted and Bush basically gave up. But Obama can’t accept either option, because both seem like betrayals of his promise, his destiny, his image of himself. And so he has chosen to betray himself in a different way, by becoming the very thing that he once campaigned against: an elected Caesar, a Cheney for liberalism, a president unbound.


Read the whole thing -- it's more analytical than polemical, despite its pointed conclusion.