Last spring, Obamacare supporters were ebullient when the Obama administration announced a milestone "victory:" Despite a truly disastrous roll-out, they'd enrolled eight million Americans in the program. The Obamacare debate, the president said, was officially over. We expressed skepticism over the White House's stats almost immediately, noting that the official numbers didn't account for duplicates, non-paying "customers," and consumer attrition -- not to mention the high percentage of "new" enrollees who previously had insurance, but were forced to use Obamacare's exchanges to obtain plans after their existing arrangements were cancelled under the new law.  The last two weeks have witnessed two more blows for the "it's working!" crowd.  First came the sharply revised 2015 enrollment projections:

Fewer than 10 million people are expected to enroll in "Obamacare 2.0" for 2015, the Obama administration said Monday. That's a significant drop from the original goal. The Congressional Budget Office had projected 13 million, but officials said they expect the ramp up to be slower than the CBO originally thought. The revised goal is 9 to 9.9 million. It raises questions about whether Obamacare enrollment will reach projections down the road. The CBO had projected enrollment would hit 25 million by 2017, but now the administration says it will probably take at least one or two more years to reach that threshold. Officials are realizing it will find it tougher to convince the remaining uninsured to enroll. Many who opted not to sign up this year said the cost was too high.


It's almost as if many people aren't too excited about purchasing less-than-affordable coverage that saddles them with high out-of-pocket costs and sparse provider networks.  One thing the administration has going for it this year is that the individual mandate tax designed to punish shirkers is rising considerably, although those penalties are still much lower than the costs associated with buying Obamacare health plans.  Now we have this embarrassing admission from administration officials, who've been forced to reveal how Team Obama inflated its top line enrollment figure:

The Obama administration said it erroneously calculated the number of people with health coverage under the Affordable Care Act, incorrectly adding 380,000 dental subscribers to raise the total above 7 million. The accurate number with full health-care plans is 6.7 million as of Oct. 15, a spokesman for the U.S. Department of Health and Human Services confirmed today, saying the U.S. won’t include dental plans in future reports. “The mistake we made is unacceptable,” Health and Human Services Secretary Sylvia Mathews Burwell said on her verified Twitter account. “I will be communicating that clearly throughout the department.” The error was brought to light by Republican investigators for the House Oversight and Government Reform Committee, using data they obtained from the U.S. Centers for Medicare and Medicaid Services….The new count puts enrollment short of a 2013 estimate by the Congressional Budget Office, adopted last year as a goal by the Obama administration, that 7 million people would be enrolled this year. Federal officials said in September they had 7.3 million people enrolled in coverage through new government-run insurance exchanges. They didn’t distinguish between medical and dental plans, breaking from previous practice without notice.


Oh yes, this was surely a good-faith "mistake," which just happened to depart from "previous practice" in order to push the White House's prized total "enrollment" number above its nominal goal.  A remarkable coincidence, no? Even top Obamacare cheerleader Ezra Klein can't spin this, even as he credulously swallows the "error" line:

This is such a dumb, unforced error by the Obama administration: http://t.co/N1VuxJjUu6


So setting aside the previously insured population, which shouldn't count towards new enrollments in my view, the administration still fell short of its initial projections, and they've since publicly downgraded their expectations for this year.  Comprehensive data from the Census Bureau and the CDC confirms that Obamacare is falling dramatically short of enrollment expectations.  Between Jonathan Gruber's slow-motion implosion, the Supreme Court taking up the federal subsidies case, and these enrollment black eyes, it's been a rough month for Obamacare.  And the losing streak is being reflected in public polling: 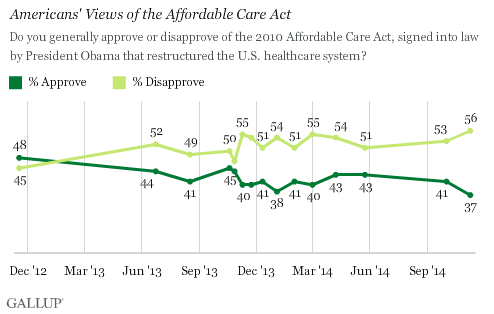