"The Affordable Care Act, by any fair measure, is working for millions of Americans." - Sebelius


(2) She actually said Obamacare's disastrous website "has never crashed," (!) adding that it is "functional." That claim requires some hardcore parsing to even remotely justify, and regardless, it's insanely terrible messaging. As if on cue, Healthcare.gov...crashed this morning and remained down throughout her testimony. This dichotomy produced several awkward (and priceless) visuals: 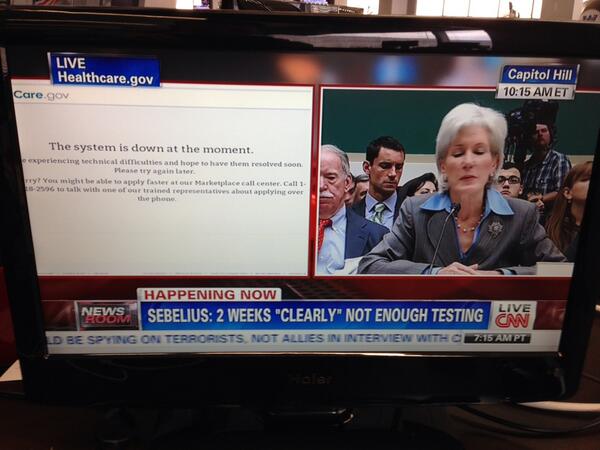 Rep. Olson holds up iPad with http://t.co/6nVcwU19CR on it, tells Sibelius "The exchange has been down during your entire testimony."


(3) When Rep. Cory Gardiner (R-CO) challenged her to enroll through the exchanges herself, Sebelius asserted that it would be "illegal" for her to do so. This is factually false. Was this a deliberate lie, or is she that ignorant of the law she's overseeing?

Sebelius STILL insisting it would be illegal for her to buy in the exchange. How does she not know this? Jesus.

(4) When you're testifying in a very high-profile, nationally-televised hearing, and you're asked if the president is ultimately responsible for the conduct and results of his administration, muttering "whatever" is not an advisable course of action:


(5) The Secretary said that she had "no indication" that the launch would go as badly as it has, claiming that "no one" recommended a delay. Has she ever met, say, a single Republican? What she meant to say, I think, was that no one on her crack team of experts formally proposed delaying the law (aside from all the other ones, of course). If -- if -- that's true...why not? The red flags and stark warnings piled up for months, culminating in dire admonitions and failed tests just days before the launch. How could a delay not have been on the table? And yet:

And he still won't fire me! RT@hughhewitt: "I assured him we were ready to go" Sebelius re briefing POTUS.


(6) Sebelius doubled down on the "you can keep your plan" lie. The Washington Post's fact-checker awarded this claim "Four Pinocchios" for its comprehensive mendacity.


(7) How is it possible to both blame the contractors for your own failures and express "confidence" in them? Sebelius tried:


(8) Facing pointed questions about data security -- some relating to today's AP scoop -- Sebelius assured Americans that she was 'absolutely committed' to protecting their private information. But being nominally "committed" to something doesn't make it a reality. For instance, this huge security vulnerability came into being despite Sebelius' prized commitment. Plus:

Also committed to working website by 10/1. RT @KatiePavlich: "I absolutely commit to protect the privacy of the American people" -#Sebelius


(9) Last week, HHS' private contractors indicated that they did have Obamacare enrollment figures. Yesterday, a senior administration official went to great lengths to avoid answering that question. Today, Sebelius denied having those numbers at all. Really? And why the mixed signals? I'd surmise that the contractors possess the information, but are legally forbidden to release them without permission -- which is why the CMS administrator refused to address the question directly yesterday, even under persistent questioning. The stats exist, but Sebelius doesn't want to talk about them because they're embarrassing.


(10) Unless Sebelius was attempting to channel the American people's sentiments on Obamacare, hissing "don't do this to me" into a live mic was probably a bad idea:

Krauthammer marvels at Sebelius' "pathetic, horrible, mortifying" performance, while Obamacare supporter Josh Barro wonders if the administration could have chosen a "more disastrous" spokesperson. I can think of at least one:

I'm speaking now at #Obamacare hearing, I want to say to GOP GET OVER IT