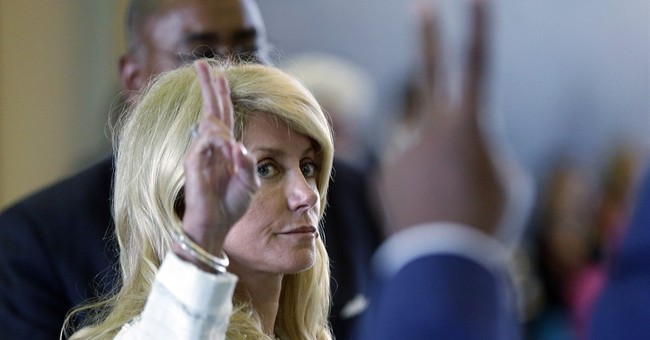 Just this week, I humbly suggested that Texas voters are coming to the conclusion that Wendy Davis is a bad person. And that was before this development.  Take it away, Wendy Davis campaign:

If this is in your ad, and your opponent is in a wheelchair, you have probably made a mistake. pic.twitter.com/gXHPVdEQ5h


The ad itself is here. It's entitled 'Justice,' and begins with the line, "a tree fell on Greg Abbott."  Really.  It goes on from there to basically attack Abbott for profiting from getting paralyzed (!) before pivoting to a series of non sequitur attacks.  Team Abbott responds:


They've also sent out an email refuting the other charges leveled in the spot. The Davis camp, meanwhile, is still blasting out press releases about their new commercial, which is being almost universally panned as disgraceful and desperate. This is beyond classless -- although what else might you expect from a candidate whose fame is exclusively owed to her avid support of late-term abortion? We decided to ridicule Davis by speculating about the depths to which her next ad might sink:


"Will the real Greg Abbott please stand up?" #NextWendyDavisAd


I'll leave you with this absolutely cutting Wizard of Oz reference. "A tree fell on Greg Abbott:"

a house fell on wendy davis.