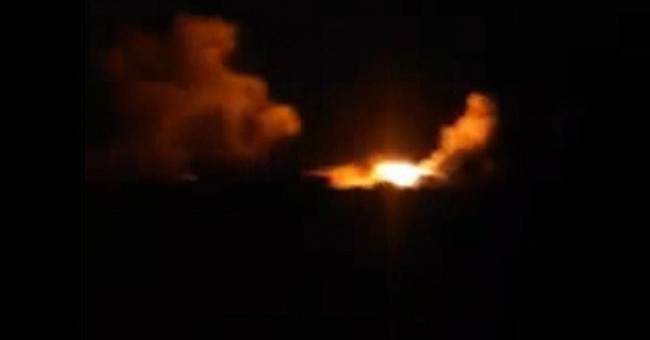 The US military, along with a coalition of Arab states, expanded its anti-ISIS bombing campaign into Syria last night, reportedly with the tacit endorsement of the Assad regime in Damascus. The New York Times reported yesterday that weeks of bombing inside Iraq has "scarcely budged" ISIS, which still maintains control over roughly one-fourth of Iraq's territory. We'll see if and how the new rounds of warfare-from-the-sky work to "degrade" the radicals.  Though the bulk of the operation is aimed at the Islamic State, American security officials have become increasingly worried about an Al Qaeda cell that's been capitalizing on the chaos and influx of western jihadists into the region. This Islamist terror group, known as Khorasan, was also a target of yesterday's scaled-down 'shock and awe' air campaign (which administration officials are for some reason assuring the media will become less shocking and awe-inspiring in the coming days):

American airstrikes in Syria have taken out members of a shadowy al Qaeda unit known as the Khorasan Group who were planning "imminent" attacks against targets including the U.S., the Pentagon said today. Pentagon spokesperson Rear Admiral John Kirby declined to go into specifics, but told ABC News' George Stephanopolous, "We had very good indications that this group, which is a very dangerous group, was plotting and planning imminent attacks against Western targets to include the U.S. homeland and it was on that basis that we struck targets, Khorasan targets inside Syria." "We believe that the individuals that were plotting and planning it have been eliminated and we’re going to continue... to assess the effectiveness of our strikes going through today," Kirby said. The Khorasan Group -- consisting of about 50 or so hardened fighters of mixed past and current jihadi affiliations -- has been holed up in Aleppo, Syria under the protection of al Qaeda's official wing in the country, Jabhat al-Nusra, developing cutting edge weapons of terror with the help of al Qaeda's Yemen affiliate to strike Western civilian aviation targets, according to a half-dozen officials with knowledge of the group who spoke to ABC News.

The Pentagon confirmed that the Khorasan network sustained "at least eight" airstrikes last night, all of which were carried out by the United States alone.  And we may have decapitated the cell's leader. With thousands of Western passport-holders flooding into Iraq and Syria to fight on behalf of the 'caliphate,' Al Qaeda is working to recruit some of these would-be fighters to carry out deadly attacks in the West, using what ABC News refers to as "cutting edge" tools of terror.  Jihadi women have used social media to help direct Westerners how to successfully travel to the region by posing as tourists entering Turkey.  The British government is moving to prevent its nationals' ingress and egress into Iraq and Syria, debating measures such as passport seizure, detention and aggressive refusal of re-entry.  The American security establishment faces a similar task, though reportedly on a smaller scale.  That being said, for the first time, the Obama administration is admitting that some American ISIS fighters have successfully returned to the homeland from the battlefield.  Disquieting, to say the least (via Time):

The Obama Administration believes some Americans who have fought alongside the militant group Islamic State of Iraq and Greater Syria (ISIS) have returned to the United States, a senior Administration official said Monday. During a briefing for reporters Monday in the ornate Eisenhower Executive Office Building on the Administration’s efforts to address the issue of so-called foreign terrorist fighters, the official said that the latest assessment from National Counterterrorism Center is that more than 100 Americans have attempted to fight in Iraq and Syria alongside ISIS, the al-Qaeda affiliated al-Nusra Front or other groups. “It includes those who’ve gone, those who’ve tried to go, some who’ve come back and are under active—the FBI is looking at them,” the official said. “These are FBI matters, I refer you to them on specifics.” It marked the first official government confirmation that at least some of the Americans fighting alongside the Islamist extremist group have returned to the U.S.


Hopefully the FBI is keeping closer tabs on these returning violent extremists than the military did with those missing Afghan soldiers, who've finally been found.  American officials believe Khorasan poses a more immediate threat to the United States than ISIS.  The White House has come under increasing criticism for its ISIS posture, including from two of President Obama's former Secretaries of Defense.  Skeptics say an air campaign will not be sufficient to dislodge and defeat ISIS (see the NYT link above), while high-ranking administration and military officials have offered contradictory statements on the possibility of deploying American ground troops -- which Obama has ruled out, discarding military recommendations.  In his speech to the nation earlier this month, the president said US actions would build on his preferred 'light footprint' intervention and counterterrorism model, citing Yemen as a success story.  Let's check in on Yemen, shall we?

In a stunning sweep of the Yemeni capital, the country's Shiite rebels seized homes, offices and military bases of their Sunni foes on Monday, forcing many into hiding and triggering an exodus of civilians from the city after a week of fighting that left 340 people dead. It was the latest development in the Hawthi blitz, which has plunged volatile Yemen into more turmoil, pitting the Shiite rebels against the Sunni-dominated military and their Islamist tribal allies.


Full speed ahead to a failed state -- not unlike the disaster playing out in another nation that benefited from Obama's vision of armed conflict.  I'll leave you with this: