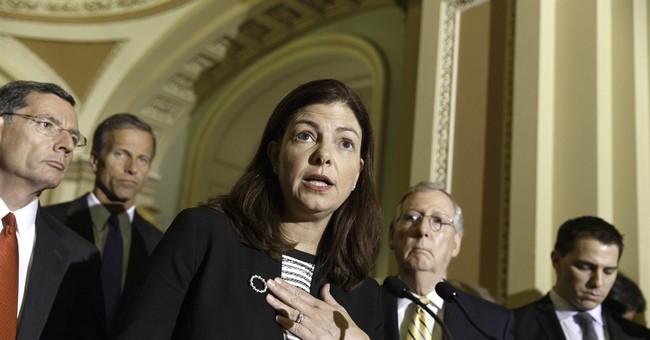 If Democrats are intent on staging moronic messaging votes designed to obfuscate the core issue in the Supreme Court's Hobby Lobby decision, Republicans stand prepared to offer their own moronic messaging legislation -- which will at least serve the purpose of exposing their opponents' deliberate distortions. As the upper chamber readies a procedural vote on Democrats' misnamed "not my boss' business" bill, The Hill reports that Senators Mitch McConnell, Kelly Ayotte and Deb Fischer are introducing a Republican alternative that would bar employers from blocking employees' access to contraception:

“We plan to introduce legislation this week that says no employer can block any employee from legal access to her FDA-approved contraceptives," McConnell said. “There’s no disagreement on that fundamental point.” The legislation appears to be an attempt by Senate Republicans to address an emotional political issue that Democrats have made central to their midterm election campaign.


The Huffington Post groans that "the GOP bill would change nothing, because women can already legally access contraceptives approved by the Food and Drug Administration." Correct. Thank you, HuffPo, for accurately identifying the entire point of Republicans' proposal: Pushing back against Democrats' repeated and highly dishonest attempts to cast the Court's narrow religious liberty ruling as a fictitious assault on birth control "access." Click through and read quote after quote from Congressional Democrats muddying the waters to promulgate the false impression that Hobby Lobby gives "bosses" the right to wield "permission slip" power over what forms of contraceptives women are allowed to access. Totally bogus. Mary Katharine Ham reiterates the actual facts, which McConnell's legislation seeks to highlight:


It makes no difference to [Democrats] that birth control was readily available to everyone, subsidized and provided free by the government, and covered by almost all employer-based insurance plans before a bureaucrat at Health and Human Services decided to force every employer in America to provide it without a copay, regardless of their religious beliefs. It was even available to Hobby Lobby employees before the Hobby Lobby case was decided and will remain available to them after that decision.


The Hobby Lobby ruling turned the clock back all the way to...2012, when HHS bureaucrats concocted their menu of mandates that touched off the current controversy. Birth control's availability and legality is not, and has never been, at issue here. The question is whether a relatively narrow band of religious employers, and religious organizations, can be forced by the federal government to directly pay for and facilitate a products that violate their beliefs. Under the Religious Freedom Restoration Act of 1993 -- co-sponsored by Ted Kennedy, passed with only three dissenting votes, and signed by President Clinton -- the government may only intrude on Americans' religious liberties if there is (a) a compelling state interest at stake, and (b) if the government employs the least invasive method possible to achieve that interest. Five justices determined that the HHS mandate failed that two-pronged test, as it pertains to closely-held businesses. MKH asks another good question: Why was this crucial, women's-rights-protecting, anti-dark-ages measure left to the whims of unelected bureaucrats? Why didn't Democrats proudly include this language in the bill itself while it was being debated? It's scandalous and outrageous that Barack Obama, Harry Reid and Nancy Pelosi did nothing -- positively nothing! -- to rectify the antediluvian, misogynistic status quo that "denied women's access to birth control," or whatever, in their own landmark legislation. How can they possibly justify this knuckle-dragging oversight? The answer, of course, is that they couldn't afford the attending political controversy that would inevitably have arisen. The American public is split on this question, with strong majorities supporting opt-outs for religious organizations. Pushing this envelope would have made it much harder to peel off just enough votes to drag the underlying bill across the finish line. Recall that Rep. Bart Stupak's recalcitrant coalition had to be bought off at the eleventh hour with a grand, empty gesture from the president. Stupak has since stated that he was duped, and that the HHS mandate clearly violates the president's executive order and the White House's assurances. Another Obamacare lie. Who could possibly have seen that coming?


Parting thought: Will Republicans get a vote on their bill? Don't hold your breath. Why would Senate Democrats obstruct a bill that explicitly satisfies their stupid and redundant "not my boss' business" motto? Here's McConnell calling out Democrats' "outlandish" claims: