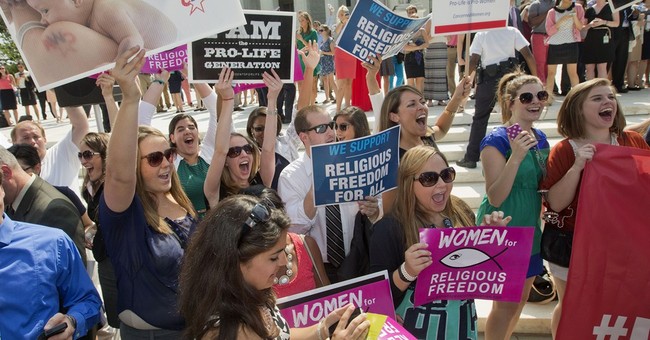 Christine and Matt brought you breaking coverage of the Supreme Court's two major decisions this morning, in which the Court limited government sector unions' powers to collect dues from non-members and ruled that the government cannot force closely-held corporations to pay for employee contraceptive coverage that violates owners' sincerely-held religious views. Both decisions mark victories for the Americans' constitutional liberties and the values of freedom and choice; they've been roundly applauded by conservatives, and rightly so. But the Court's 5-4 decisions were tailored rather narrowly and do not necessarily deliver landmark precedents on behalf of conservative causes. A brief review:


Harris v. Quinn - Andrew Grossman of the Heritage Foundation wrote this precis of the case, describing it as:

A challenge to states' authority to require that home-based workers submit to an exclusive representative for collective bargaining—i.e., a labor union. Organizing home-based workers has been among the labor movement's greatest prospects for adding to its diminishing ranks, and over the past decade, national unions have convinced more than a dozen states to recognize home-care and day-care workers receiving state subsidies as state employees. Consequently, these employees may be unionized and made to pay dues."


The woman who brought the case, Pamela Harris, is the primary caregiver for her severely disabled adult son. Under an executive order issued by Illinois Governor Pat Quinn -- cheered on by the SEIU -- Harris and others in her situation (who receive government stipends through a state disability program) were made de facto state employees, for the purposes of collective bargaining. Even though Harris wanted no part of the public sector union, didn't join it, and objected to its political activity, she was nevertheless required to pay "fair share" dues. This form of coercion has been spreading across the country, as government unions seek creative methods of stanching their membership bleeding (fueled, in part, by reforms like this). Harris sued on First Amendment grounds, and won. Some union supporters were nervous that the Court might use this case as an opportunity to strike at the heart of a 1977 decision, Abood v. Detroit Board of Education, which determined that public sector unions could require workers to pay dues to cover collective bargaining costs, but not political activities. Today's ruling declined to extend the Abood precedent to a new group of workers who've been effectively forced into unionizing by the government, but it didn't challenge the underlying precedent. Some Court watchers think Justice Alito's majority opinion may have begun laid the groundwork to a wider revisiting of Abood down the line, but it didn't go there today.


Sebelius v. Hobby Lobby Stores - In another 5-4 ruling authored by Justice Samuel Alito, SCOTUS determined that the Obama administration's "birth control mandate" Obamacare regulation fan afoul of religious liberty protections codified in a 1993 federal law called the Religious Freedom Restoration Act (RFRA). Under the Court's form of scrutiny in this case, the government had to prove that its mandate both (a) served a compelling state interest, and (b) was executed in the least intrusive restrictive manner available. The contraception mandate failed to satisfy the second condition of that two-pronged test (the first wasn't explicitly decided). The resulting decision is a victory for religious freedom, but it's not as sweeping as some may think. The ruling is narrowly applied to the contraception mandate alone (the Court spelled out other Obamacare coverage mandates that would not be subject to challenges on religious grounds), and it only pertains to "closely-held" corporations -- ie, companies that aren't typically publicly-traded, and whose ownership is concentrated in a family or a very small group of people. For those companies alone...


Many observers believe the tailored nature of this ruling likely means that these protections would not apply to larger or publicly-traded companies. (The vast majority of American employers already provide contraception coverage without controversy. Indeed, Hobby Lobby itself offered its employees a wide array of birth control options, but objected to HHS' inclusion of abortifacients in its mandated coverage list, prompting the company's successful lawsuit). Other legal challenges involving non-profits, such as the Little Sisters of the Poor case, were not resolved in this ruling. Furthermore, as SCOTUS Blog notes, "Under the Hobby Lobby decision, the government [could] pay for the coverage itself so that women receive it." Some on the Left are hyperventilating about "theocracy," and ranting that birth control decisions should be none of women's "boss' business." Conservatives agree with the latter point. Hobby Lobby attorney Lori Windham made that point beautifully in an interview with CNN earlier:

"Hobby Lobby would love to stay out of this, and leave this decision to a woman and her doctor. It’s the federal government that told them that they had to be involved and cover these things, even though they violated the Green family’s faith."


Exactly. Many of the loudest shouters get the issue exactly backwards. Today's decision in no way "bans" or restricts women's access to contraception. The ruling simply states that proprietors of a certain type of business, who are also women and men of faith, cannot be compelled by the federal government to pay for (and directly facilitate the use of) contraceptive products that run counter to their religious beliefs. Under the partially-invalidated mandate, failure of compliance is punished by hefty fines. The administration's heavy-handed regulation -- remember, the HHS mandate was not in the text of Obamacare, as passed by Congress -- was deemed to be an undue burden on those specific employers' free exercise rights, as detailed in RFRA. That law, incidentally, was enacted by Congress with three total dissenting votes and signed by President Clinton. Two of its primary sponsors in the Senate were Ted Kennedy and Chuck Schumer. Daniel Foster makes an important point, albeit snarkily:

#DarkAges RT @DanFosterType: And with that, the Supreme Court has turned back the clocks to early 2010.


Prior to the 2010 Obamacare contraception mandate, birth control was legal, widely available, and generally affordable. None of that has changed, and that's a good thing. Public polling shows that most Americans believe in general that employers should provide birth control coverage (as I mentioned earlier, a most do), but public opinion cuts much closer when the issue is the government forcing the issue. The Washington Post reviews three different CBS News polls that show public opinion all over the map, due in part to question wording. One of those polls was released in March. It showed that a slim majority believes companies should be forced to pay for contraception coverage, but with a large majority supporting an "opt-out" for religiously-affiliated employers. A recent Gallup poll demonstrated that near-unanimous majorities of Republicans, Independents and Democrats view birth control as morally acceptable. The Hobby Lobby case, and other challenges to the HHS mandate, have never been about restricting contraception or trampling on women's rights, despite what some mendacious demagogues may say: