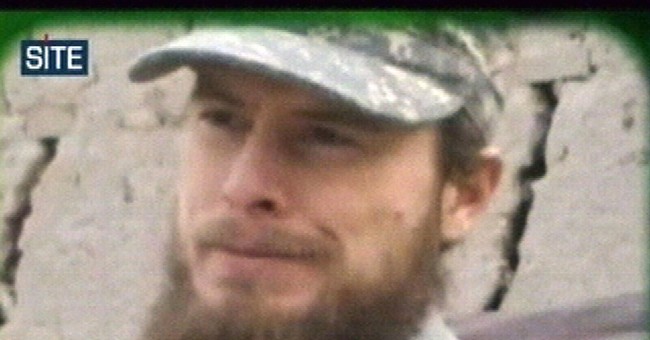 I'll admit to being genuinely shocked when I saw tweets along these lines earlier, the contents of which Katie expanded on this afternoon:

Fox's @JustinFishelFNC confirms - Sgt. Bowe Bergdahl is expected to "return to life as a regular Army soldier" as early as today


My initial reaction: So soon? The deal to secure Bergdahl's release was executed in late May. Six weeks later, he's ready to be re-integrated into an active duty context? The guy was held captive by the Taliban and Haqqanis for five years, and has returned home to a firestorm over compelling allegations of desertion, if not outright collaboration. The public didn't support the Obama administration's 'one-apparent-deserter-for-five-hardened-jihadists' swap, with veterans and military families overwhelmingly opposed to the deal. Current service members have made their views crystal clear, too. So how is this supposed to work, exactly? A distrusted (and no doubt traumatized) accused deserter is back on the job lickity-split despite (a) the military's initial findings that he'd abandoned his post, (b) the fact that a follow-up investigation isn't yet complete, and (c) recent reports of active duty soldiers receiving pink slips while deployed abroad? At first blush, it appeared as though the US Army had internalized Susan Rice's "honor and distinction" idiocy, an indication that the White House's "suck it up and salute" political brigade has won the day. To that end, Katie embeds an angry tweet from one member of Bergdahl's former unit, who evidently perceived the Army's decision to reinstate Bergdahl as a slap in the face. But it seems there's more to the story. Twitter's 'First Team Tommy,' a veteran, admonished outraged conservatives on Twitter, suggesting that this step was necessary for the military justice process to move forward:

Hey Folks, Before the outrage machine gets up & running -> Bowe #Bergdahl absolutely has to be RTD before anything else can happen with him

Here's another reason #Bergdahl is being RTD'd: If they were to charge him while still under a medical command it effs up the process.


Allahpundit summarizes: "I believe that if Bergdahl’s discharged, he can’t be court-martialed. He has to be on active duty for that. (See, e.g., section 802(c)(4) of the UCMJ.) Leaving him in the care of military doctors would also complicate the legal process...Moving him to a desk job at Fort Sam Houston solves those problems." In other words, it's very likely the case that Bergdahl hasn't been re-embraced and set up with a cushy a desk jockey job for kicks; the Army's simply doing what must be done to tee up critical next steps. Critics of the Bergdahl deal and proponents of due process should think twice before venting fury over these developments. Parting thought: Is a court martial conviction, followed by an Obama pardon, in the offing here? Allahpundit thinks it's inevitable, while Tommy adamantly disagrees. I tend to lean in the latter direction, but the White House's acute tone-deafness on this entire matter has been mystifying, so you never know.