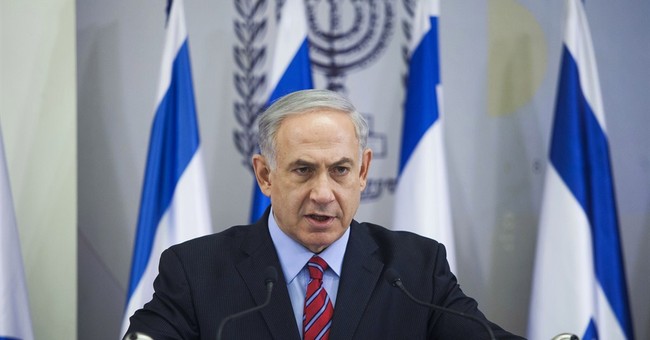 Israeli Prime Minister Benjamin Netanyahu appeared on two US Sunday morning shows to staunchly defend his nation's aggressive response to rocket fire from Hamas terrorists in Gaza. Tensions have been running extremely high in the region since the June kidnapping and cold-blooded murder of three Israeli teenagers -- one of whom was a US citizen -- by Hamas-linked killers. A revenge killing of a Palestinian youth by Jewish perpetrators in early July was quickly and unequivocally condemned by Israel's leaders, who promised to prosecute the offenders. Since the initial abduction, Hamas has rained hundreds of rockets on Israel, setting off air raid sirens and sending civilians scrambling for shelter. No Israelis have been killed by the current round of shelling, thanks to the country's sophisticated 'Iron Dome' missile defense shield and its efficient bomb shelter protocols.

Israeli troops have responded with surgical attacks against Hamas targets -- including private homes and mosques, which the terrorists cynically use as staging grounds for launching attacks. A small force of IDF soldiers made a brief incursion into Gaza over the weekend; four troops were wounded on the mission, the purpose of which was to take out a rocket launching site. With many critics within the anti-Israel international community dishonestly and predictably casting Israel as the disproportionate aggressor, top Israeli officials are pushing back with a public relations offensive. The country's ambassador to the United States, Ron Dermer, appeared on CBS' Face the Nation yesterday, and acquitted himself impressively. If you don't have time to watch the entire clip, try to catch three short segments. First, the Israeli aerial footage of a military mission being called off for fear of civilian casualties (1:28), second, Derner's cell phone sounding a real-time air raid siren as a Hamas rocket sped toward an Israeli city -- live during the interview (3:00), and his utter destruction of a Palestinian spokesman's revisionist history earlier in the program:


"The Palestinian Ambassador sat in this chair right before I got on, and he said, 'the root cause of the problem is the [Israeli] occupation.' But those talking points are nine years old. Israel left Gaza. We withdrew all of our settlements from Gaza. We withdrew all of our military forces from Gaza. And since that time, we've had 9,000 rockets fired at Israel. It's unacceptable. We have to defend ourselves."


Filling in for Chris Wallace on Fox News Sunday, Brit Hume asked Mr. Netanyahu how long his country's offensive would continue, and what it might entail. Netanyahu declined to specify battle plans, opting instead to repeatedly invoke Israel's absolute right to protect its citizens. He drew a parallel to the United States, asking rhetorically if Americans would accept a scenario in which 80 percent of the US population faced the threat of rocket fire from a neighboring terrorist quasi-state. Stay tuned for his clear moral distinction between Israel's respect for innocent life and Hamas' deliberate targeting of civilians -- and exploitation of their own civilians for propaganda purposes:


"I just want your viewers to imagine the United States being bombarded -- not in one city, or two cities -- but in every city between New York and Colorado. Maybe 20 percent of the United States would be exempt from this. Eighty percent of your citizens would have to be in bomb shelters, or ready to go into bomb shelters within a minute to a minute-and-a-half max. No country can accept that. We can't accept that, and we'll take the necessary action to stop it…Here's the difference between us: We're using missile defense to protect our civilians, and they're using their civilians to protect their missiles."


An excellent, and accurate, turn of phrase. Israel bends over backwards, often to the detriment of their own military missions' efficacy, to avoid civilian deaths. They drop leaflets warning people to leave homes and facilities targeted for destruction. They employ warning phone calls to the neighbors of IDF targets. They drop light, "door knock" shells on roofs, a precursor to more destructive strikes. Hamas deliberately uses schools, Mosques, hospitals and private homes to launch rockets, then screams bloody murder about Israel's "excesses" when they eliminate those locations. And far too much of the world plays along with the macabre theater. On the subject of human shields and Hamas' egregious tactics, Jake Tapper grilled a former PLO spokeswoman on CNN late last week. She assailed Israel throughout the interview, calling references to Palestinian terrorists' martyrdom culture "offensive," and dismissing accusations of Hamas' confirmed human shield tactics as "racist." Tapper would have none of it, throwing empirical evidence right back at her:


Note how this "moderate" Palestinian pundit toes the radical Hamas line every step of the way, claiming to be unaware of a recent televised appearance in which a Hamas spokesman urged Palestinians to embrace the practice of ignoring Israeli evacuation warnings in order to form a protective barrier around Hamas leaders. Watch for yourself the evidence that is so clear that even the UN can't deny it:


[Acting as human shields] "has proven effective against the occupation. Also, this policy reflects the character of our brave, courageous people. We in Hamas call upon our people to adopt this policy in order to protect the Palestinian homes."


It's a ghoulish win/win for the terrorists: When Israel backs off, Hamas' munitions and leaders are protected. When civilians die, it's a priceless PR coup. The remains of the dead are paraded around by wailing Palestinians for the cameras, whipping up anti-Israel sentiment, and feeding the bankrupt moral equivalency narrative. I'll leave you with three thoughts: (1) It is the stated objective of Hamas to destroy the state of Israel, which the terror group's charter states has no right to exist. (2) Hamas is a designated terrorist organization by the US State Department. (3) Despite that fact, when Hamas and the PLO recently joined forces to form a unity government, the Obama administration chose to not only recognize that alliance, but continue to fund it with US tax dollars.