Does the New Benghazi Indictment Undermine the White House's Story? 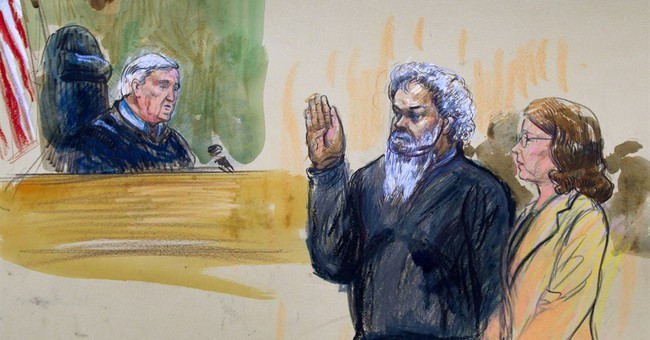 The House of Representatives' Select Committee on Benghazi isn't expected to gavel into open session until the early fall. When they do, today's indictment of Ahmed Abu Khattala may provide another strand of evidence with which to challenge the Obama administration's public narrative in the aftermath of the attacks. US forces captured Khattala, one of the alleged masterminds of the deadly attacks, in mid-June -- a move dismissed by some intelligence officials as a politically-timed clipping of "low hanging fruit." He's has been transferred to the United States for today's appearance in district court. By a two-to-one margin, Americans disapprove of the decision to try him as a civilian -- replete with the same rights as US citizens -- rather than as a military combatant in the tribunal system painstakingly carved out by the Bush administration, Congress and the courts. The Washington Times reports that the government's indictment against Abu Khattala "spells out a calculated conspiracy" to attack the US mission in Benghazi, which would further undermine the White House's repeated references to an online video as a major triggering event leading to the 2012 raid:. Here's how the paper frames the court document:


The Obama administration’s just-released criminal complaint against the alleged mastermind of the Benghazi terrorist attacks provides a final contradiction to its own evolving explanations for what happened that day. The Justice Department’s indictment spells out a calculated conspiracy by Ahmed Abu Khatallah and associates to attack the U.S. diplomatic mission and CIA annex, which killed four Americans. The indictment might be viewed as a death knell for a theory that the attack resulted from a spontaneous protest against a U.S.-produced video. Now in custody, Khatallah was a commander of Ansar al-Sharia in Benghazi, a U.S.-designated terrorist group, and is himself deemed a global terrorist by the State Department….The unsealed June 26 indictment, coinciding with Khatallah’s U.S. District Court appearance in Washington, states that the grand jury does not know when the conspiracy began. It says Khatallah “did knowingly and intentionally conspire and agree with other conspirators, known and unknown to provide material support and resources to terrorists, that is personnel including himself and others.” The indictment says Khatallah intended the material support and resources “to be used in preparation for and in carrying out” the attacks that killed the ambassador, his aide and two ex-Navy SEALs protecting a CIA base that came under precision mortar attack.


Khatallah -- who lived openly in Libya for nearly two years after the attack, granting media interviews to several outlets -- has self-servingly claimed that the orchestrated attack was, indeed, a response to the 'offensive' internet clip. Awaiting trial, he has every reason to play along with the administration's line and distance himself from a criminal terrorist conspiracy. Some on the credulous Left have taken his story at face value. Former Secretary of State Hillary Clinton continues to insist that the video played a role in the attacks, despite [a] the State Department's conclusion on September 13, 2012 that they had been the work of Ansar al-Sharia, [b] testimony from Amb. Stevens' second in command that the video was a "non-event" in Libya, and [c] US intelligence estimates, which did not link the clip to the coordinated acts of terror. Senior administration figures continued to emphasize the video explanation days after the attacks were determined to be terrorism, with White House spokesman Jay Carney claiming, "we have no information to suggest that it was a pre-planned attack" on September 14th. A previously-withheld internal email released in April demonstrated that White House officials inserted the "video" explanation into Susan Rice's talking points prior to her infamous appearances on all five Sunday shows. Previous Benghazi-related emails tracked the administration's efforts to scrub references to Al Qaeda and previous attempts against the Benghazi compound from public accounts, for explicitly political reasons. But does the Justice Department's indictment directly contradict the White House's preferred storyline? Former federal prosecutor Andrew McCarthy -- who brought down the so-called Blind Sheik -- doesn't think so. He told me this morning that the indictment is striking for two reasons:


First, it's remarkably short, clocking in at less than two pages. In his experience, he said, terrorism indictments typically run dozens of pages and are packed with relevant background and context. This document contains none of that; it doesn't even mention Khatallah's designation by the US State Department as a leader of Ansar al-Sharia, an Al Qaeda affiliate. Second, the "conspiracy" is framed in a remarkably narrow a way, perhaps with the intent of avoiding any explicit contradiction of the White House's story. The way it's drawn up, Khatallah is accused of a conspiracy to lend his personal efforts to unnamed terrorists for perhaps as little as two days. McCarthy called the indictment "laughable." Here's the document itself. I discussed my conversation with McCarthy and this issue generally on Fox News this morning:


Incidentally, Andy is out with a new book that builds a case for the impeachment of President Obama. He will publish a more in-depth analysis on the Khatallah indictment at National Review Online this weekend.