By the Way, Al Qaeda is Taking Over Entire Iraqi Provinces 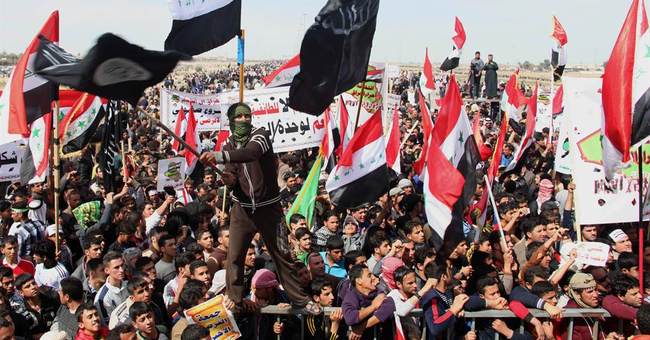 A mere footnote, I realize, in an age of "ending wars" at virtually any cost -- but utterly terrifying for average Iraqis, and a bona fide threat to US national security interests:

Al-Qaeda seized control of Iraq's third biggest city on Tuesday, freeing thousands of imprisoned fellow fighters in a series of jailbreaks and sparking a mass exodus of refugees. The assault on the city of Mosul, 225 miles north west of Baghdad, saw the Iraqi army retreat to the outskirts after a sustained assault by men armed with heavy machine guns and rocket-propelled grenades. As well as seizing the main governorate building - forcing the city's governor to flee - the gunmen were also reported to have gained control of three different jails, numerous police stations and an airport, where several military planes and helicopters were based. The loss of the city, home to around one million people, is potentially a huge challenge to the Iraqi government, which has been struggling to quell a regalvanised al-Qaeda insurgency for more than two years. As residents fled in their thousands, they spoke of seeing militants raising al-Qaeda's black flag from buildings, and of newly-released prisoners running through the streets in yellow jumpsuits.


Some reports indicate that the entire province of Nineveh has been overrun by Al Qaeda-aligned militias known as ISIS -- the Islamic State in Iraq and Syria. These frightening developments aren't isolated; two large Iraqi cities were captured by extremists earlier this year, with government forces still struggling to re-take lost territory. The New York Times reports that the recent fall of Mosul reaped an "arms windfall" for terrorists who seized Iraqi military weapons and vehicles, many of which were US-supplied:


The insurgent fighters who routed the Iraqi army out of Mosul on Tuesday did not just capture much of Iraq’s second-largest city. They also gained a windfall of arms, munitions and equipment abandoned by the soldiers as they fled — arms that were supplied by the United States and intended to give the troops an edge over the insurgents ... [US-trained and -equipped] proxy forces do not always prove equal to the task, and when they buckle, the United States finds itself having unwittingly armed its enemies — a problem the Obama administration has been trying to avoid in Syria by carefully limiting its aid to the opposition there. The militants who swept into control of Mosul on Tuesday are believed to be connected to the main Islamist militant group fighting in Syria. Inadequate or unreliable local allies have allowed American military aid to fall into the wrong hands a number of times in recent years.


Indeed they have, with Libya being an obvious example. Here was the scene in Mosul yesterday:

dude RT @AbuUmar8246 An entire regiment of vehicles captured by the Islamic State after the conquest of Mosul, #Iraq pic.twitter.com/e8CAsVL7fu


What is the US doing to ensure that Iraq doesn't descend into a hellish haven for Al Qaeda, and to ensure that our troops' profoundly costly, years-long sacrifice isn't erased by extremists? The State Department scrambled to announce another counter-terrorism training initiative with the Iraqi government this summer, but what about the US troops still stationed in Iraq for the critical purpose of fortifying the fledgling government and beating back hardcore terrorist elements? At the White House yesterday, new Press Secretary Josh Earnest responded to the deteriorating situation on the ground with assurances that "the United States will continue to stand with the Iraqi people and provide all necessary and appropriate assistance to the government of Iraq under the strategic framework agreement.” He went on:

"In terms of our relationship with [the Iraqi military], it’s an important one but it’s governed by the status of forces agreement.”


Just one problem: That status of forces agreement doesn't exist because the Obama administration recklessly and indefensibly let it lapse, so there is no residual American force remaining in-country to fight Al Qaeda. Foreign Policy detailed that shocking failure in 2011. Brian Faughnan flags this flashback to Obama's 2008 rhetoric about the Iraq war, which urged a "careful" withdrawal that included "a residual force to perform specific missions," such as targeting Al Qaeda:


As jihadis overrun Mosul, worth going back to see what Barack Obama said about Iraq in '08. http://t.co/z9fenur1bS pic.twitter.com/HNgSygCps7


He followed through on neither of those core principles, and core Al Qaeda is now reaping the benefits of that incompetence and/or ambivalence. And while we're at it, make sure to read this story about an intensive study that concluded that radical Islamist terrorist organizations are increasing in number:


An new report by RAND Corp. released Wednesday finds that the number of Islamic radical groups operating in the world has skyrocketed since 2010. The study’s author looked at “thousands of published primary source documents, including public proclamations and internal memos written by senior operatives from al Qaeda and other terrorist groups,” the security website Defense One reported Wednesday. RAND Corp. concluded that there has been nearly a 60 percent increase in the number of Islamic radical groups over the last four years and a 300 percent jump in the number of attacks perpetrated by al Qaeda and its affiliated groups.


Al Qaeda is not "on the run." They're establishing new strongholds in Syria and Iraq, with their sights set on Afghanistan -- since we continue to telegraph our exact movements to the enemy in furtherance of domestic political ends, and as we willingly replenish the Taliban's militant leadership. Ending unpopular wars in Iraq and Afghanistan plays extremely well with a war weary public. But doing so precipitously and irresponsibly has real, lasting consequences for our allies and our interests. An emboldened and proliferating Al Qaeda isn't some hypothetical, far-away problem, as we learned so painfully in 2001. I'll leave you with Charles Krauthammer's harrowing take:


UPDATE - How's this for a cheery thought?

@guypbenson ISIS are worst than AQ. They're so bad that AQ have disowned them.