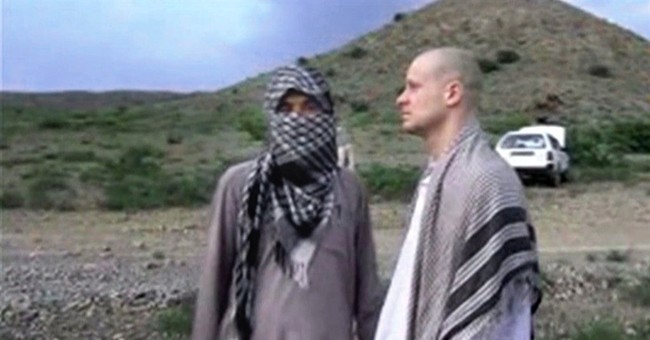 A new Pew Research/USA Today poll reveals US veterans' strong opposition to the Obama administration's deal that released five Taliban commanders in exchange for Sgt. Bowe Bergdahl, with a closer split among the general public on the issue. A plurality (43 percent) of Americans say the trade was the "wrong thing" to do, with roughly one-third of respondents supporting the move:

Among veterans and veteran households, results get substantially more hostile toward the administration's position. "Veterans are much more harsh in their assessment of the 28-year-old sergeant. Only 6% of veterans who responded say they sympathized with him, while 33% say they were angry. By 68%-16%, veterans say Obama made the wrong decision," USA Today reports. That's a whopping 52-point margin among veterans themselves; the disparity is a yawning 29 points among veteran households. Non-veteran households are split almost evenly on the basic right/wrong question. Team Obama's "we bring back our people no matter what, full stop" bravado clearly did not impress the men and women who've worn the uniform. A VFW spokesman doesn't mince words:

"If he was a captured prisoner of war, we wouldn't be having this discussion," says Joe Davis, the director of public affairs for the Veterans of Foreign Wars. "He put his teammates in jeopardy, and you absolutely don't do that in a combat zone." Veterans are worried about the precedent set by the transfer, Davis says. "We have a long history in this country of not negotiating with terrorists," he says. "And we just did."


The Obama administration continues to insist that it didn't negotiate with terrorist, a claim we explained here, and eviscerated here. The new survey shows that a large majority of Americans believe it's the US government's responsibility to do what it can to secure a captured soldier's release, regardless of the circumstances of his capture. Less than one-third said that Bergdahl's alleged desertion rendered him unworthy of the government's efforts. Interestingly, an Economist poll published last week produced markedly different results on this point. One possible explanation for the disconnect could be that last week's survey explicitly referenced desertion, whereas the Pew poll somewhat euphemized the action as "leaving his post." One area of broad agreement was on the president's responsibility to inform Congress on "decisions like these:"

The vast majority (64/30) of Americans believe Congress should have been consulted, including a (67/38) landslide among independents. Please note that liberal Democrats -- who became great fans of muscular executive power circa January 20, 2009 -- hold the polar opposite view of most Americans, with two-thirds saying the president's shouldn't have been required to tell Congress, as he did not. On that point, Noah Rothman flagged a surprising exchange on MSNBC yesterday in which Andrea Mitchell (yes, this Andrea Mitchell) took apart a State Department spokesman for inventing excuses over why the administration "couldn't" provide an advance briefing to relevant member of Congress on the Bergdahl deal:


Ms. Harf claimed that members were not briefed ahead of the Bin Laden raid, inducing an annoyed Mitchell to call her out with contradictory evidence. Harf tried to draw a distinction between telling Congress about the "architecture" of the plan versus sharing "operational details," stressing that if any information pertaining to the Taliban swap had leaked out, Bergdahl's life would have been in jeopardy. (Which, again, makes no sense, since the outlines of a potential deal had been discussed in private and in the press for years -- a point Harf later concedes. Bergdahl's captors suggested the exact trade they ended up receiving in a phone call with the Associated Press last year). Exhausted by several bouts of refutation from the host, Harf retreated, saying there was no point in "recreating history" -- which is a rather succinct summary of what she was attempting to do in the first place. The administration has offered three separate justifications for why they didn't loop Congress into their decision before executing it, but Mitchell hits on the painfully obvious true reason:

Mitchell: And the [Congressional] leaders, in a bipartisan way, said don't do it. Don't trade these five. So the administration knew they would be getting objections in advance. Is that why they didn't tell them?


Harf's response to that question? "Not at all." Sure.