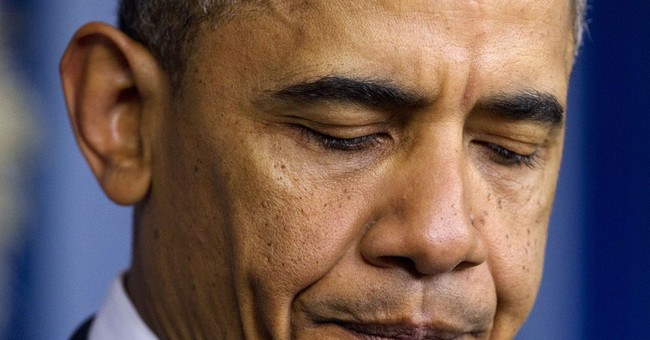 President Obama's announcement that he has accepted VA Secretary Eric Shinseki's resignation did not come as a shock to many of us, and neither did the shameless and revisionist nature of his statement. Obama called the Shinseki controversy a "distraction" (this is what he really means by that), praised Shinseki's job performance at the VA as among the best in history, suggested that the "bad news" about the agency's failings and abuses never reached the highest levels, and claimed that old computer systems contributed to the wait list problems. He also called for more resources -- ie, taxpayer money -- to be devoted to the VA. Every one of these arguments is specious.

If Shinseki's leadership was truly "exemplary," he wouldn't have been forced out amid scandal. If it were true that unpleasant information had been suppressed and kept from the big bosses, that would have been an indictment of Shinseki's management -- not to mention Obama's, who made reforming and improving the VA a centerpiece of his 2008 campaign. But it's not true. Numerous internal red flags and warnings over the last five-plus years weren't dealt with adequately, or sometimes at all. Since administration higher-ups frequently claim to discover problems from the media, how is it that they could have missed major exposes in the press regarding the state of affairs at the VA? The computers line is particularly risible -- and not just because the VA instituted a buggy, Healthcare.gov-esque IT system just last year. The crux of this scandal is that VA administrators instructed employees to create secret wait lists in order to conceal how badly the were falling short of DC-mandated targets. Promotions and bonus money was at stake. That has absolutely, positively nothing to do with computers. And finally, click through for all the evidence you need that these problems were not caused by a lack of "resources." Obama characteristically claimed "responsibility" for the debacle, then noted that the issues pre-date his presidency in his next breath. Yes, we're aware. But he campaigned to fix those flaws -- and that was almost six years ago. Obama wasn't the only one tripping over himself to lavish praise upon the resigning cabinet secretary. Vermont Socialist Bernie Sanders, who chairs the Senate Veterans Affairs Committee, uncorked this jaw-dropper on CNN:

Sanders cites improved wait time stats as an attaboy to Shinseki...in the middle of a scandal about falsified wait time stats. Has he even bothered to read the IG report, which describes "systemic" manipulation of wait lists, with sick veterans waiting an *average* of roughly four months for an appointment. Meanwhile, Philip Klein has a useful rundown of some of the myriad instances in which lefties cited the VA as a paragon of government-run healthcare. Some of his examples may sound familiar. Sean Davis mines one example that's too delicious not to highlight:

I mean, this one from @mattyglesias where he lectures an actual doctor on how amazing the VA is, is spectacular. http://t.co/AU3xXaEYpZ


Finally, if you read nothing else today about the VA mess, read these two items. First, a WSJ op/ed on rationing and bureaucratic lethargy by a VA doctor:


In my experience at VA hospitals in San Antonio and San Diego, patients were seen in clinics that were understaffed and overscheduled. Appointments for X-rays and other tests had to be scheduled months in advance, and longer for surgery. Hospital administrators limited operating time, making sure that work stopped by 3 p.m. Consequently, the physician in charge kept a list of patients who needed surgery and rationed the available slots to those with the most urgent problems. Scott Barbour, an orthopedic surgeon and a friend, trained at the Miami VA hospital. In an attempt to get more patients onto the operating-room schedule, he enlisted fellow residents to clean the operating rooms between cases and transport patients from their rooms into the surgical suites. Instead of offering praise for their industriousness, the chief of surgery reprimanded the doctors and put a stop to their actions. From his perspective, they were not solving a problem but were making federal workers look bad, and creating more work for others...At the VA hospital in St. Louis, urologist Michael Packer, a former partner of mine, had difficulty getting charts from the medical records department. He and another resident hunted them down themselves. It was easier for department workers to say that they couldn’t find a chart than to go through the trouble of looking. Without these records, patients could not receive care, which was an unacceptable situation to these doctors. Not long after they began doing this, they were warned to stand down.


And second, this analysis by Yuval Levin, who explains why the VA will be extremely difficult to reform:


The fact is that the VA has not been able to translate its relative advantages, or its growing budgets (the agency’s budget has grown far more quickly than its patient load over the past decade), into the sort of superior performance that Congress and successive administrations have hoped for. A major reason for that is the department’s (and not just each hospital’s or sub-agency’s) administrative dysfunction, which really has to be seen to be believed. The Department of Veterans Affairs is almost certainly the most poorly managed cabinet department, and it has to rank among the most poorly managed federal agencies at any level. It is characterized by deep dysfunction at pretty much every level (and not just in its health-care system; the veterans’ disability system has enormous problems too).


Read the whole thing for an explanation of why well-meaning veterans' groups also contribute to the VA's endemic failings. Also, don't miss this NYT report on the VA's doctor shortage. All three pieces point to an unwieldy, bloated, wasteful, unresponsive, unaccountable, and too-often callous bureaucratic swamp. Which is, by definition, what government healthcare looks like.