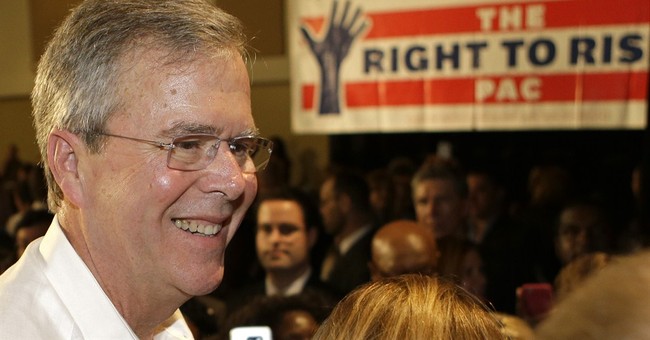 For a Republican presidential candidate, just how important is winning New Hampshire? That is to say, can a Republican hopeful win the GOP nomination without capturing the Granite State?

Certainly, it’s been done before. Recently too. George W. Bush won the nomination without winning New Hampshire in 2000.

On the other hand, you’ll recall that John McCain and Mitt Romney in 2008 and 2012, respectively, were successful primary candidates, in large part, because they won that state. And while it didn’t bring them much luck in the general election, it was a crucial, first step towards consolidating primary votes.

Perhaps, then, this is a primary race we should all pay closer attention to—and keep our eyes on. With that in mind, a new Gravis Marketing poll—conducted mere days before the state’s newly-crowned frontrunner announces his candidacy—shows Jeb Bush with a commanding, early lead:

As you can see, there’s one glaring X factor: Donald Trump finished in fourth place with 12 percent (!) of the vote. In other words, if and when he decides to sit this one out, whom will his supporters turn to? Considering the fact that Donald Trump never runs for president, it seems likely that, per usual, he’ll back out at the last minute. But if he doesn’t, perhaps Trump winning the state isn't altogether unthinkable.

For now, however, Jeb Bush is the frontrunner by almost double digits.

Meanwhile, some other interesting, random internals from the survey: Fifty-one percent of respondents support sending "additional ground forces" overseas to kill ISIS militants; 75 percent say the US is not “doing enough” to combat terrorism; a plurality of respondents are pro-choice (45/40) and do not support a "pathway to citizenship" for illegal immigrants (43/37); and 62 percent of respondents own firearms.

Finally, for what it’s worth, the D/R/I sample breakdown is 1/57/42 and 487 "GOP" primary voters participated in the survey. See the full results here.