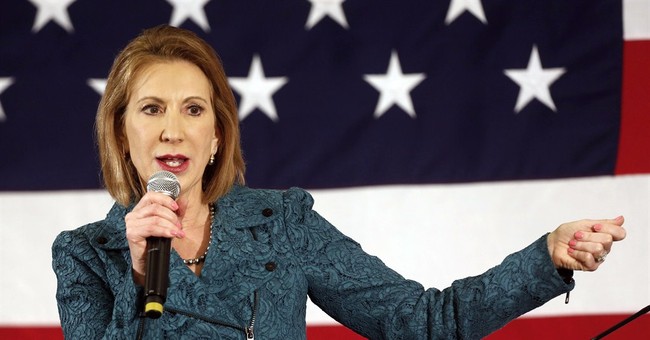 So we’re told. When she finally does announce, however, she will be the only female Republican candidate in the race. And while her polling numbers are perilously low, she’s made a splash criticizing the Democrats’ scandal-ridden candidate, testing her message, and touring the Hawkeye State:

Carly Fiorina plans to launch her presidential campaign on May 4, in an online announcement that dispenses with the pageantry that has become de rigueur in 2016 White House runs.

Instead, Mrs. Fiorina, the former chief executive of Hewlett-Packard Co., will formally declare her Republican campaign online and hold a conference call for the national press, according to a person with knowledge of the campaign’s plans.

The Wall Street Journal also points out that Fiorina will officially enter the race the same day as Ben Carson – and not hold a rally of any kind. That’s…a curious decision. Marco Rubio, for instance, received a noticeable bump in the polls after his highly anticipated announcement – as did Ted Cruz. And they have much higher visibility and name recognition than Carly Fiorina.

Holding a public rally would have given her a rather plum platform, not to mention free media attention and a bigger microphone. So isn't this a missed opportunity, especially for someone just stepping onto the national stage?

In any case, after the announcement, the Journal reports Fiorina will drop by the major television networks to plug her message — and her brand new book. Evidently, her team knows what they're doing.