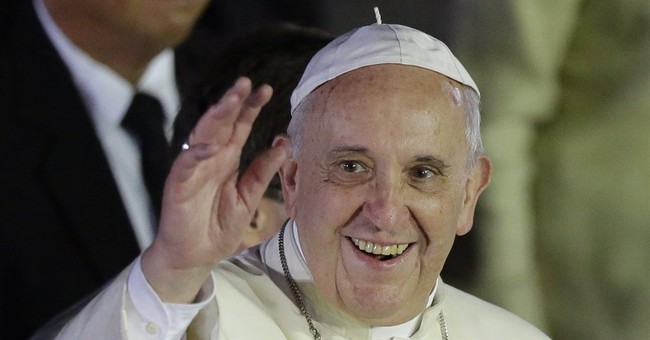 Pope Francis will visit the United States on a papal visit in late September and his itinerary is already chalked full of events. Naturally, the official announcement was made public months ago. Today, however, we learned that the Bishop of Rome was also invited to the White House to meet with President Obama and the First Lady—an invitation he has evidently accepted.

“The President and the First Lady will welcome His Holiness Pope Francis to the White House on Wednesday September 23,” the White House press secretary said in a statement today. “During the visit, the President and the Pope will continue the dialogue, which they began during the President’s visit to the Vatican in March 2014, on their shared values and commitments on a wide range of issues, including caring for the marginalized and the poor; advancing economic opportunity for all; serving as good stewards of the environment; protecting religious minorities and promoting religious freedom around the world; and welcoming and integrating immigrants and refugees into our communities. The President looks forward to continuing this conversation with the Holy Father during his first visit to the United States as Pope.”

Of course, these are all issues Pope Francis and President Obama broadly agree on. It will be interesting to see, however, if they discuss issues that divide them—as they did during the president's first encounter with Pope Francis in Rome roughly a year ago.

“During the cordial meetings, views were exchanged on some current international themes and it was hoped that, in areas of conflict, there would be respect for humanitarian and international law and a negotiated solution between the parties involved,” the Vatican said in a statement following the world leaders’ first face-to-face meeting. “In the context of bilateral relations and cooperation between Church and State, there was a discussion on questions of particular relevance for the Church in that country, such as the exercise of the rights to religious freedom, life and conscientious objection, as well as the issue of immigration reform. Finally, the common commitment to the eradication of trafficking of human persons in the world was stated.”

Will these issues be raised again? In all likelihood, yes.

After all, during their last in-person discussion, Pope Francis reportedly expressed grave concern that taxpayer dollars were funding abortion services under Obamacare—which studies show is inevitably happening. So don't be surprised if he does again, as this is an issue very close to the hearts of (conservative) American Catholics.

For what it’s worth, Pope Francis will also deliver remarks in front of Congress and the United Nations, attend a Catholic conference, and hold a public Mass in Philadelphia during his papal visit.