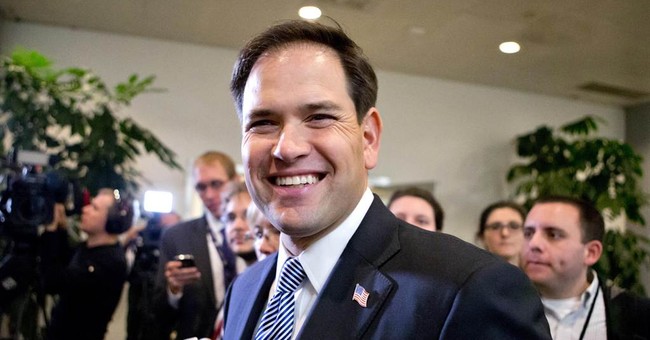 The establishment is taking over.

Just kidding. But this poll is interesting:

A new Zogby Analytics of likely Republican primary voters shows that the 2012 nominee is in the lead for 2016, but only three points ahead of former Florida Governor Jeb Bush and current Florida Senator Marco Rubio.The poll of 223 likely primary voters was conducted online January 16-18 and has a margin of sampling error of +/-6.6 percentage points.

For months, Rubio has been scraping the bottom of the barrel in 2016 polls. As far as I can tell, this is the first poll showing him exceeding double-digit support in months. But there is something far more interesting about this poll than just the top-line numbers. Rubio, for his part, is earning 13 percent overall largely -- and almost entirely -- because women support him.

“Rubio is receiving 22% support among women to only 4% of men and does equally well (16% each) among both self-identified Republicans and conservatives,” the pollsters write. By contrast, Romney and Bush are only earning 13 percent and 10 percent among women, respectively. That’s a huge advantage. For a party that has struggled to make inroads with this key demographic, Rubio is showing early signs of promise.

Another point to emphasize (and the Zogby pollsters did as well) is that, besides maintaining support-levels far above his rivals among female voters, Rubio’s broadly appealing. He doesn’t strictly fit the mold of a "tea party" candidate (think his advocacy for and defense of comprehensive immigration reform) but nor is he an "establishment" type, either. In 2010, he ran as a staunch conservative and was even featured on the cover of National Review magazine early in the campaign. So his support among both tea party and more moderate respondents -- in this particular survey, at least -- typifies his growing appeal and unique ability to transcend party labels. This realization may have also been one factor which led him to essentially take the plunge already.

Guy has written an extensive post titled “Rubio’s Gamble.” Go read it. In sum, he argues that the Florida senator’s path to the nomination is hardly clear-cut. But as this poll shows, he seems to have the potential and ability to make a huge splash in 2016.

We'll see if he sinks or swims.