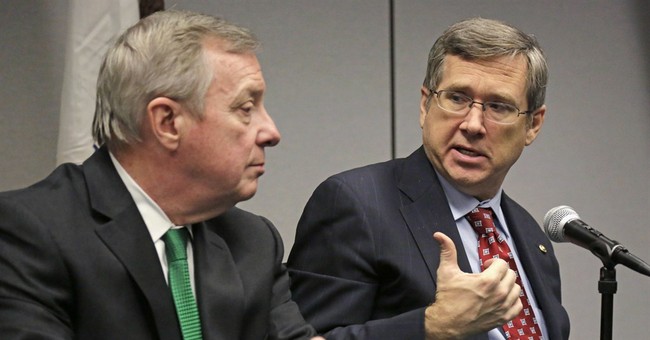 Raif Badawi, who has already received one round of blows for mocking Islamic leaders and publishing anti-government blog posts in Saudi Arabia, is fighting for his life. In fact, his situation is so precarious that he may not live to receive all the court-ordered lashes imposed on him. The U.S. State Department, for its part, has appropriately condemned the Saudi government and it’s antiquated judicial system. But it's not enough. Now, U.S. lawmakers are doing their part to apply additional pressure on the Sharia law-governed nation to abolish corporal punishment, and to finally free the man who has long been the face of Saudi cruelty and oppression.

A high-powered group of U.S. senators is demanding that Saudi Arabia cancel the "barbaric punishment" of a blogger sentenced to 1,000 lashes for criticizing the country's clerics, saying the floggings are particularly troubling in the wake of terror attacks driven by "religious intolerance."

Blogger Raif Badawi has been ordered to endure 20 weekly sets of 50 lashes until he is whipped 1,000 times. Saudi authorities postponed the second round, after a doctor concluded his wounds from the first 50 lashes had not yet healed. …

Eight U.S. senators, in a letter to Saudi King Abdullah, warned that "further violence" against Saudi citizens expressing themselves peacefully "will unfortunately be a source of continued divergence between our two countries."

They urged the "immediate halt" to the lashings and the prisoner's "immediate release." The senators said they share the concerns of Badawi's wife that he could be "irreparably injured or killed" if the whippings continue. They also urged the release of his lawyer, a human rights activist sentenced to 15 years in prison.

It’s worth noting that only two Senate Republicans -- and six Senate Democrats -- signed the letter. Apparently, defending free speech and condemning human rights abuses are not issues every US Senator can get behind.