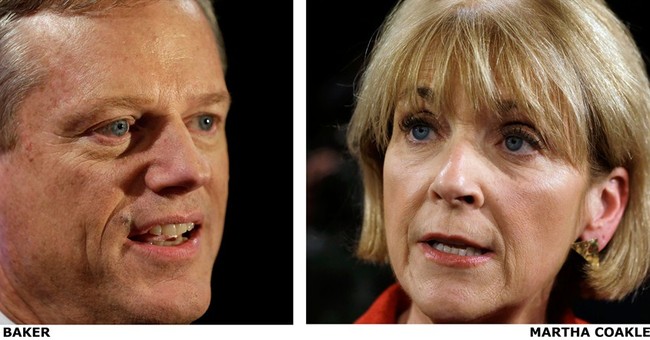 Fresh off two big debates this past week that turned some heads, WBUR’s last tracking survey of the cycle has the candidates neck-and-neck. Baker is earning 43 percent of the vote; his opponent 42 percent.

But check out this graph: At first blush, one would assume Baker is finished. The poll shows him down by double digits in the city of Boston -- a deficit of 24 percentage points. But in fact he’s actually slightly ahead, in part because Coakley hasn't locked up the Democratic base as winning progressive candidates for governor have done in the past. Also interesting, as the pollsters note, in 2002 Mitt Romney lost Beantown two points shy of 30 percentage points (see above). So if, according to this offering, Baker is only expected to lose urban voters by 24 points, he's in good shape.

The following is also good news for Baker supporters.

“As we reported in a previous post on Poll Vault, Coakley needs to turn the gender gap into 'a gender gulf' to win,” the pollsters explained in their analysis of the survey. “In the last few weeks, she’s done the opposite. The WBUR surveys shows Coakley’s support with women is deteriorating. Six weeks ago, she led Baker by 20 points; now, her lead has shrunk to 9 in this group."

A nine point advantage is hardly “a gender gulf”; Coakley's not even leading by double digits anymore.

Finally, and for what it’s worth, there was a much-talked-about moment during Tuesday evening's debate. Baker actually broke down in tears as he described the plight of a fisherman in New Bedford who stopped his children from accepting football scholarships to follow his own, near moribund, career path:

Emotional stuff. And yet, the Boston Globe reports that the conversation between Baker and the fisherman in question happened roughly five years ago, not recently. Nevertheless, Baker fired back yesterday, brushing off criticisms that his tears were disingenuous or that he made up the anecdote:

Eight percent of respondents are still undecided. This race could go either way.