Showdown in NH: Are You Ready For Tonight? 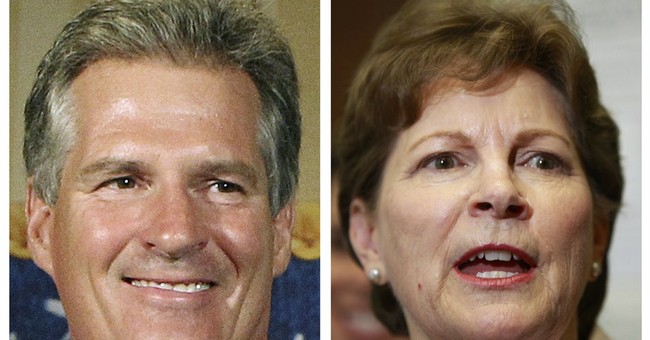 Concord, NH – Greetings from the Granite State! Happily, I arrived in chilly New England late Monday night, and by the time you read this, I will be well on my way to the NECN/Concord Monitor/UNH New Hampshire Senate debate at the Capitol Center for the Arts. Tonight, Republican Senate hopeful Scott Brown will verbally cross swords with incumbent Sen. Jean Shaheen (D-NH).

Since we last wrote about this race, there have been two headline-driving developments: First, Scott Brown finds himself in a bit of hot water after saying in a radio interview last week that the federal government's worry-inducing response to the Ebola threat would not have happened under President Romney. Democrats, of course, haven’t taken too kindly to this suggestion. Second, and more importantly, a new Suffolk/Boston Herald poll shows the race still firmly within the margin of error: Jeanne Shaheen: 49; Scott Brown: 46.

(1) Obamacare is still—and will continue to be—unpopular through Election Day. A whopping 55 percent of respondents said the president’s signature domestic achievement is “generally bad” for the state of New Hampshire. And since Sen. Shaheen voted for the law, I expect this issue to come up in a big way during tonight’s debate. Brown has been an outspoken opponent of the Affordable Care Act since 2009, and indeed, it was one of several reasons why he was able to rise to prominence.

(2) President Obama is not popular in New Hampshire. This is one theme that has been consistent in every poll conducted recently in the Granite State. Fifty-six percent of respondents disapprove of the way President Obama has run the country, although only 11 percent regret voting for him. On the other hand, Sen. Shaheen's disapproval rating is only 46 percent (as is her approval rating).

Can her better numbers, then, save her in an election year when “every single one” of the president’s policies is "on the ballot"?

(3) The ‘war on women’ charge isn’t sticking. For example, when asked if respondents “trust Brown on women’s issues,” 45 percent responded “yes” whereas only 44 percent said “no.” Which is to say he’s above water on issues that sunk two promising GOP Senate candidates in 2012. If Scott Brown loses, therefore, it won’t necessarily be because voters think he’s trying to ban contraception or outlaw abortions. It will be for other reasons.

(4) For what it’s worth, 29 percent (!) of respondents used to live in Massachusetts whereas 37 percent moved to New Hampshire “from somewhere else.” So most likely voters, we can infer, are from out of state. This suggests that the "carpet bagger" charge (bound to come up in tonight’s debate) won’t be nearly as politically damaging in New Hampshire as maybe other states, where most voters are lifelong residents.

This is a seat that early on most political observers dismissed as safely Democratic. Poll after poll, however, shows the contours of the race have shifted, and although Shaheen is technically ahead, her lead is tenuous. It is therefore difficult to overemphasize the importance of tonight's debate; if a clear winner emerges, momentum could shift. Issues I expect to be discussed tonight are the following: immigration, Obamacare, jobs and the economy, the rise of ISIS, the Ebola threat, and women’s issues.

Finally, stay tuned for my recap after the lights dim and the curtains close. The debate begins at 8:00 PM (EST) sharp, and Meet the Press anchor Chuck Todd will moderate.