Guess Who's Paying For Monkeys to Get Drunk? 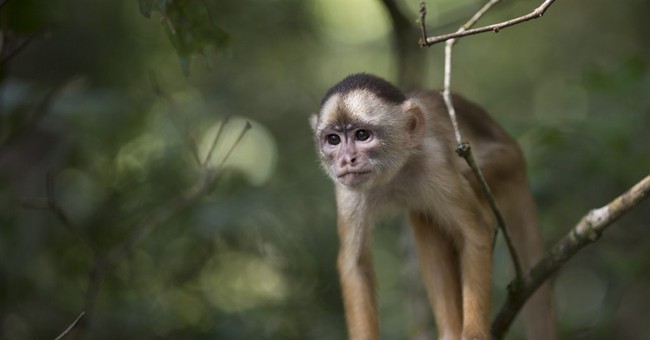 For some reason, the National Institutes of Health believes it’s a good idea to study the effects of monkeys getting hammered using taxpayer dollars. What redeeming quality or benefit this might have to the public is beyond me, but at the very least, it must be mildly entertaining -- and fun -- to participate in such edifying studies (via the Washington Times):

There’s a whole lot of drinking going on in the name of government science, and some watchdogs think it’s the American taxpayer who is getting hammered. Right now the National Institutes of Health is spending $3.2 million to get monkeys to drink alcohol excessively to determine what effect it has long term on their body tissue.

NIH also has handed out $69,459 to the University of Missouri to study whether text messaging college students before they attend pre-football game tailgates will encourage them to drink less and “reduce harmful effects related to alcohol consumption.” And the government’s premier research arm has doled out money in recent years for research on binge-drinking mice, inebriated gamblers and pilots seeking the sensation of flying drunk — on a simulator of course.

Veryyyyyy important stuff. And yet there’s apparently a case to be made for why such "research projects" are important:

NIH defends such expenditures on the grounds that these research projects help those they fund improve their “potential to develop into a productive, independent research scientist.” In an email to The Washington Times, the NIH pointed out that the goal of the Missouri text message project wasn’t just to save the lives of coeds but also to empower “promising predoctoral students to obtain individualized, mentored research training from outstanding faculty sponsors while conducting dissertation research in scientific health-related fields relevant to the missions of the participating NIH Institutes and Centers.”

That is to say, it’s a form of training, I suppose. Hence, it doesn’t matter what these researchers study, so long as they are studying something, and therefore honing new skills that will ultimately make them useful in their respective fields. Frankly, that rationale sounds…utterly ridiculous to me, but on the plus side, such wastefulness has not gone unnoticed: The NIH has earned itself one the Times’ most coveted and prestigious awards:

For its use of American tax dollars to study inebriated pilots, mice, monkeys and students, the NIH wins this week’s Golden Hammer, a weekly award from The Times aimed at highlighting examples of questionable or wasteful spending.