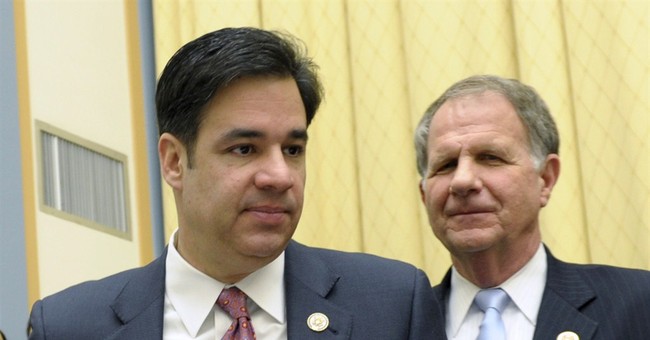 Rep. Raul Labrador (R-ID), who you may recall was one of the few congressional Republicans to abstain from re-electing John Boehner House Speaker in 2013, is now officially running for Majority Leader.

As a result, he will be running against House Majority Whip Kevin McCarthy (R-CA) for the open position, who many in Congress believe to be Eric Cantor’s heir apparent:

Labrador announced his decision in a news release Friday afternoon. The Idaho Republican faces an uphill battle to defeat Majority Whip Kevin McCarthy, who is seen as the overwhelming favorite for the position.

After Financial Services Chairman Jeb Hensarling, R-Texas, decided not to run, a number of conservative lawmakers turned to Labrador to be their candidate. And after Rules Chairman Pete Sessions dropped out of the race Thursday night, McCarthy was unopposed.

McCarthy deftly positioned himself as the frontrunner by ostensibly convincing more conservative members of his caucus to bow out of the race. But Rep. Labrador isn’t taking the bait, it seems. As noted above, he wants the newly-elected House Majority Leader to reflect the wishes and resolve of the American people. And, sorry to say, his opponent doesn’t really strike me as someone who has his hands firmly attached to the pulse of public opinion:

He hangs out with billionaire Elon Musk, rides bikes with actor Kevin Spacey and counts Arnold Schwarzenegger and Condoleezza Rice as buddies.

He visits Silicon Valley almost every month, and flies from Washington to his district in Bakersfield, Calif., virtually every weekend to see his family, even if he stays for just 12 hours. When schmoozing with celebrities, the onetime deli owner often snaps a selfie on his iPhone — he’ll show his collection to anyone who wants to see it. He gushes about the painting of President Abraham Lincoln in his office or the modernized version of “Washington Crossing the Delaware” displayed in his conference room.

But don’t let the affability and toothy smile fool you. Kevin Owen McCarthy lives and breathes the House of Representatives. He even sleeps in his office.

That may be so, but let's not forget that the people of Virginia handily rejected the House Majority Leader at the polls earlier this week -- a guy who spent his last primary day at a fundraiser in the capital and spent more money on steak dinners than his opponent did on his entire campaign. Optics matter. Still, the Politico articles notes that McCarthy’s one heck of a vote getter, and like Lindsey Graham, knows how to ably clear a field of potential rivals.

Nevertheless, Rep. Labrador (R-ID) presumably has the backing of a large number of Tea Party and Libertarian House members -- otherwise, why on earth would he be running? Perhaps, then, he does have a shot at winning this thing.

I for one will be very interested to see how it all turns out.