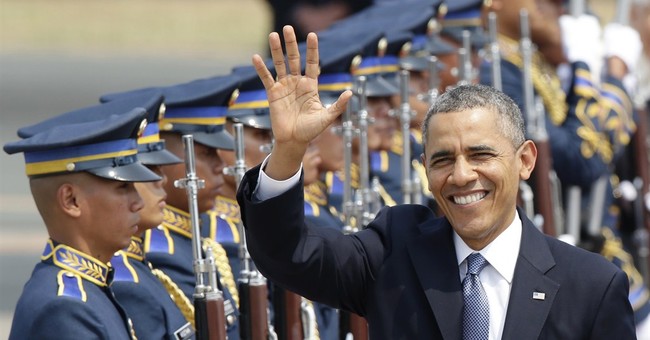 That top line number is telling, but it needs a little bit of context.

Out of the 20 quarterly surveys the pollsters representing All State/National Journal have conducted since 2009, the president’s approval ratings have sunk below 41 percent on only two other occasions before today: in November 2013 (38 percent) and September 2013 (40 percent), according to National Journal’s Ronald Brownstein:

President Obama's approval rating remains ominously weak among the constituencies that could tip the battle for control of the Senate in November, the latest Allstate/National Journal Heartland Monitor Poll has found.

Obama's overall approval, standing at just 41 percent, remains near the lowest level ever recorded in the 20 Heartland Monitor Polls since April 2009. And only one in four adults say his actions are increasing economic opportunity for people like them, also among his worst showings in the polls. His numbers are especially meager among the non-college and older whites that dominate the electorate in the seven red-leaning states where Democrats must defend Senate seats in November.

These findings are taken from the 20th quarterly Allstate/National Journal Heartland Monitor Poll conducted by the Strategic Communications Practice of FTI Consulting. The full results, exploring Americans' views on how to drive social and political change, will be published next month in National Journal's magazine.

While Congress’ approval ratings are markedly lower than the president’s (11/80) -- a bit of good news for Democrats, I suppose -- Brownstein notes that the way voters appraise incumbent presidents is much more instructive in determining midterm election outcomes than the former. In other words, the lower the incumbent president's approval ratings, the more likely it is that his party will lose congressional and Senate seats.

This is why things are looking rather bleak in the red states Senate Democrats are contesting seats in this fall; the president’s disapproval ratings are alarmingly high there. In short, working class whites without postsecondary degrees -- and whites over the age of 50 -- have soured on this president, and since white voters make up a larger percentage of total voters than they do in most other states, this could be a huge problem for Democrats:

Obama's standing with the key groups in those states remains tenuous in the new Heartland Monitor Poll. Among whites overall, just 35 percent said they approve of his performance, while 59 percent disapprove. That's a slight improvement from the previous two Heartland Monitor Polls last fall, but still at the lower end of his range among whites since taking office. Obama faces an even larger 62 percent disapproval from both non-college whites and whites older than 50; only about one-third of each group approve of his performance.

There is one caveat Brownstein ask us to consider in his conclusion: many vulnerable Senate Democrats running for re-election have not yet been weighed down (at least in the polls) by the president’s unpopularity. Yet. But that could all change as November approaches.

Democrats have all but accepted they will not recapture the House in 2016. Their singular hope, then, is to increase or maintain the number of seats they hold in the upper chamber, thus preventing President Obama from becoming a lame duck president. But with his approval ratings dragging at historic lows, and voter disenchantment on the rise, Senate Democrats have at least a few reasons to be worried about maintaining their majority in 2015.