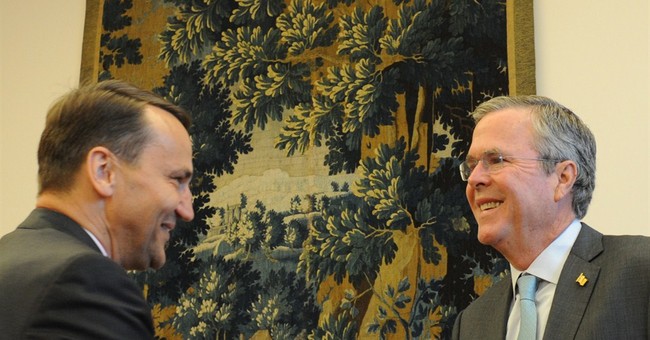 Former Gov. Jeb Bush is across the pond this week on a trip that is setting him apart from other GOP presidential hopefuls — and from his older brother.

Bush, who has not yet declared his presidential run but is widely expected to this summer, has spent the week delivering speeches, holding press briefings, and meeting with leaders in Poland and Germany.

Over the first three days, every meeting, speech and photo op underlined his campaign’s chosen themes: the importance of strengthening the U.S. relationship with its NATO allies, the importance of containing Putin and finding new opportunities for fostering economic growth and trade across the Atlantic.

Bush's visit is not designed as a crash course, but rather as a showcase of the foreign policy acumen he already possesses. He has traveled to 22 countries since 2007 alone.

The week’s itinerary alone set Bush apart from his rivals, who typically go to London and Israel, the two countries most often stamped on the passports of GOP contenders. The swing through Eastern Europe and the focus on the threat Russian President Vladimir Putin poses to NATO allies is, Bush’s team believes, closer to a graduate level seminar than the foreign policy 101 crash course assigned to governors struggling to make the leap to the global stage.

A key aim for Bush on this trip is to avoid making gaffes, a problem that plagued Mitt Romney's visit to London back in 2012 — and more recently, Scott Walker and Chris Christie.

So far, the trip has gone swimmingly. No gaffes, no blunders, and no news. Bush is sure to tout the trip when election season heats up, and it will put pressure on the other presidential contenders to put together cohesive foreign policy plans to present to the electorate.