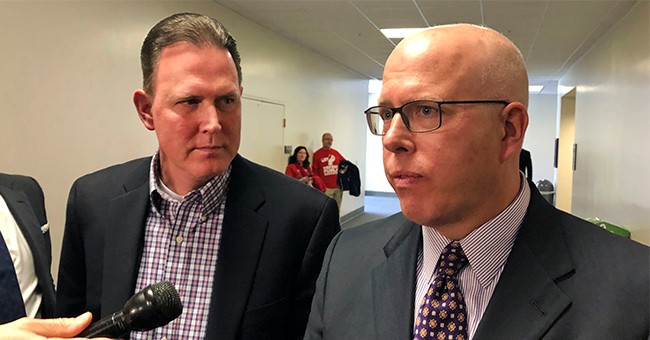 Covington Catholic High School student Nick Sandmann has had a rough few months ever since he was caught on camera grinning at a Native American veteran in the nation's capital. His critics accused him of mocking the veteran and used the incident to try and prove that all young, white Catholic males who wear MAGA hats are racist bullies. The media ran with that narrative for quite some time.

But, additional footage showed us that there was more to the story. The veteran, Nathan Phillips, approached the group of boys first. Sandmann told NBC's Savannah Guthrie he had no intention to instigate - he was just trying to keep calm in a situation that could easily get out of control.

Considering how the media treated him before having all the facts, Sandmann and his family decided to sue a few outlets who seemed most eager to demonize him. First up, The Washington Post. Sandmann and his lawyers Lin Wood and Todd McMurtry sued the outlet for $250 million in damages last month. In the complaint, filed in U.S. District Court in Kentucky, Wood and McMurtry claim that the WaPo engaged in "a modern-day form of McCarthyism" and "ignored basic journalistic standards" when reporting on their client.

Then, Sandmann sent CNN a $275 million defamation suit. McMurtry broke the news on Fox News with "The Story with Martha MacCallum" on Tuesday. Sandra Smith filled in for the host.

"Well, what CNN’s tagline is facts first," the attorney said. "And what we believe their reporting was in this circumstance was lies first; cover up second, and facts not yet determined by that organization."

He went on to summarize how CNN nearly single handedly ruined their client's otherwise "perfect reputation."

"He was loved by his parents, respected at his school, and had many good friends at Covington Catholic High School. So he was a person that was doing very well in life and due to his strong character, he still is.

"But never the less, his character has now been determined by the lies issued by CNN. So the facts were not first, the lies were."

The lawyer insists they gave the network a chance to retract their original damning reports, but they did not respond within the timeline mandated by Kentucky law.

This won't end with CNN. McMurtry said they plan to file a suit "every few weeks or month." They have "at least 10 top targets in the media and individuals," including NBC, the AP, HBO and Kathy Griffin.