Cuomo: All Trump Did Was 'Toss a Few Paper Towels' in Puerto Rico 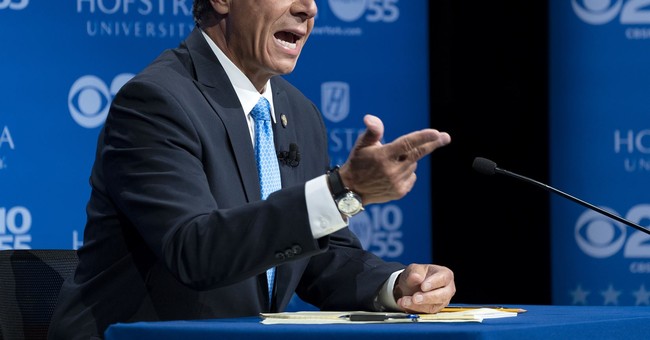 President Trump upset folks on Tuesday by again patting his administration on the back for a job well done in Puerto Rico. When asked about the U.S. response to last year's devastating hurricanes Maria, Harvey, and Irma, Trump said they deserved an excellent grade.

New York Gov. Andrew Cuomo was disgusted by Trump's remarks. The most the president did during the crisis in Puerto Rico, Cuomo suggested, was "toss a few rolls of paper towels" to residents and fly back to Washington.

He tossed a few rolls of paper towels and then abandoned Puerto Rico in a way he never would have done to Florida and Texas.

President Trump should do something useful and push his fellow Republicans to deliver the aid package Puerto Rico still desperately needs to rebuild. https://t.co/BaELl6H6iP

Cuomo also indicated last week that he was going to help families sue Trump for his inaction during the storm, accusing the White House of violating Puerto Ricans' constitutional rights of equal protection under the law.

“It just goes to the lack of understanding of reality that he has,” she said during a live phone call with Hardball's Chris Matthews. “This was never about politics. He’s talking about unsung praise. Well, you know, nobody’s singing his praises.”

She also noted the following:

Success? Federal response according to Trump in Puerto Rico a success? If he thinks the death of 3,000 people os a success God help us all.

Other critics pointed out that even the Federal Emergency Management Agency released a report earlier this year admitting its failings.

The report found Puerto Rico's emergency-supply warehouses were nearly empty when Hurricane Maria hit in October, without things like cots or tarps, because many of the supplies had been rerouted to the U.S. Virgin Islands.

The report also found FEMA had been understaffed going into the hurricane season and that most specialized disaster staffers were deployed to the other storms when Maria struck.

The initial death toll from Hurricane Maria was 64 souls. Last month, a George Washington University study sadly revised that number to nearly 3,000 - roughly the same number as those lost on this day 17 years ago.