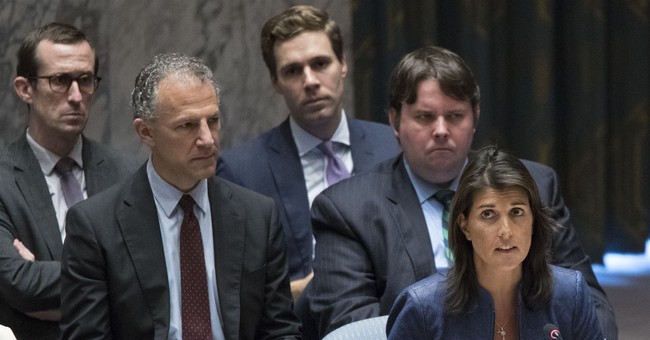 U.S. Ambassador to the UN Nikki Haley sent another strong warning to Bashar al Assad's Syrian regime at the United Nations Friday. Assad and Russia continue to launch airstrikes in the Idlib province. Idlib is the last major area held by rebels in Syria.

"The U.S. has been very clear" in its warnings against Syria, Haley said. Now, if they continue to ignore them, Assad can expect "dire consequences."

.@nikkihaley: “The Assad regime has left behind a country of rubble. The atrocities committed by Assad will be a permanent stain on history.” pic.twitter.com/Tz54A7jKK9

Any assault on Idlib would be "a dangerous escalation of the conflict in Syria," Haley noted. Ninety-nine percent of those targeted are innocent civilians, she added. That is seven times the amount of people who were attacked in eastern Ghouta and over ten times the number of people trapped in Aleppo. The Assad regime "must pause" its offensive.

She said much of the same on Thursday.

"The Trump Administration and the international community have made it clear that there is no military solution to the Syrian conflict," she told the United Nations Security Council. The "political process" must be allowed to proceed.

We are about to potentially witness the wholesale slaughter of 100,000’s of innocent human beings in #Idlib #Syria. Not rebels or terrorists,but children, teachers, merchants, bakers, taxi drivers etc., regular people who find themselves trapped in a war zone with no escape. https://t.co/B5xO31oUbG