DeSantis: My Comment Had Nothing to Do With Race 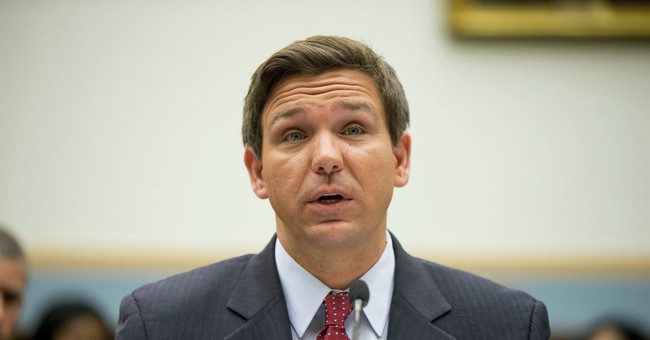 Rep. Ron DeSantis (R-FL) is running for governor and made the mistake of using the phrase "monkey this up" in an interview Wednesday when referring to his black Democratic opponent. DeSantis said that Tallahassee Mayor Andrew Gillum, the Democratic gubernatorial nominee, was too radically progressive for Florida and "the last thing we need to do is monkey this up by embracing a socialist agenda."

Critics, and some media outlets, suggested that phrase was inherently racist. The Hill published a headline directly linking the comment to Gillum's race.

Someone even suggested DeSantis's interview should be "career ending."

For anyone other than a Trump Republican that would be career ending. Here, it's positive gold as a dog whistle. The real people are appalled.

Stunningly, Dictionary.com joined the chorus of critics, tweeting that DeSantis's use of "monkey this up" was a dog whistle.

When the words “monkey this up” are used to refer to electing a man of color, that would be a blatant ... https://t.co/SaLDWdlUgF https://t.co/r9yNl2DF4P

DeSantis tried to clear the air on Fox News Wednesday night. Race, he said, was the last thing on his mind.

“It has zero to do with race” -FL gubernatorial candidate Rep. Ron DeSantis responds to outrage over his ‘monkey this up’ comment pic.twitter.com/CX5iTMwXtz

“It has zero to do with race,” DeSantis told Sean Hannity. “It has everything to do with whether we want Florida to continue to go in a good direction.”

Gillum isn't right for Florida because he wants to abolish ICE, he wants tax increases and single payer health care, according to DeSantis, adding, "I don't care what color you are."

Gillum, however, said his opponent was apparently using the Trump campaign playbook.

"It’s very clear that Mr. DeSantis is taking a page directly from the campaign manual of Donald Trump, but I think he’s got another thing coming to him if he thinks that in today’s day in age Florida voters are going to respond to that level of derision and division," he said.

DeSantis and Gillum face off in November.