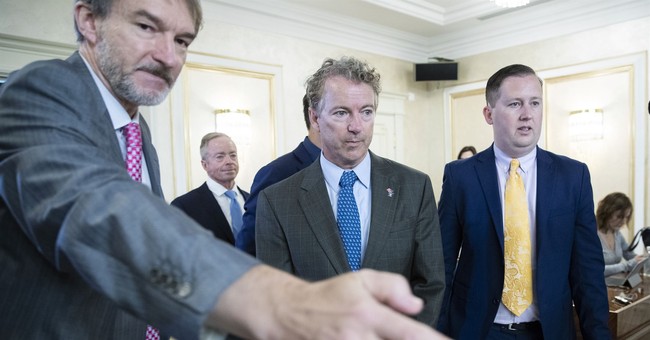 Sen. Rand Paul (R-KY), emboldened by his meeting with a Russian delegation in Moscow Monday, announced that he has invited members of the Foreign Affairs Committee of Russia to Washington. The senator released a statement explaining the importance of a continued dialogue with Russia.

“Engagement is vital to our national security and peace around the world," Paul said. "Today, I met with Chairman Kosachev, and we agreed on the importance of continued dialogue. I invited the Russian Federation to send a delegation to the Capitol, and they have agreed to take this important next step.”

"We had general discussions about a lot of issues [but] our biggest issue is no dialogue," Sen. Rand Paul replied when asked if he discussed U.S. election interference with Russian statesmen before inviting them to Capitol Hill https://t.co/ZWmIUUBS1Z pic.twitter.com/qSTf2G3nYA

“I’ve traveled here to say that there are many Americans who want to have diplomacy, that want to have engagement,” he said. “I’m one of them.”

One reporter asked if the senator had discussed election interference with the Russian officials.

“We had general discussions about a lot of issues,” Paul responded.

If the Russian Federation accepts the invite, it would be their first trip to Capitol Hill in three years. In addition, the parties have agreed to another meeting in a neutral, third country.

President Trump continues to face charges that he colluded with Russia to win the 2016 presidential election, particularly after tweeting this weekend that his son Donald Trump Jr. met with a Russian lawyer during the election to get dirt on his opponent.

"This was a meeting to get information on an opponent, totally legal and done all the time in politics -- and it went nowhere," Trump wrote. "I did not know about it!"

It was "opposition research," Trump said, not collusion.

Still, nearly everyone agrees that Russia did do some meddling in our election process. That's why Trump received heat from both Democrats and Republicans after his meeting with Russian President Vladimir Putin in June. He was given the chance to call out Russia for interfering in U.S. elections, and punted the opportunity. Sen. Paul was one of very few lawmakers to come to his defense.