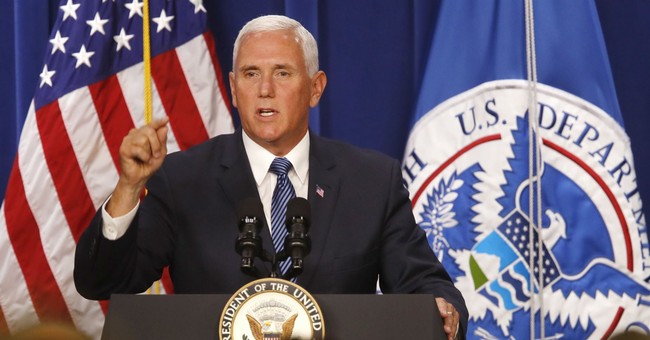 Vice President Mike Pence defended the president's joint appearance with Russian President Vladimir Putin in Helsinki, Finland on Monday. He's one of the few. Most people who witnessed Trump siding with Putin this week in regards to the Kremlin's interference in U.S. elections have expressed outrage and shock. Pence, however, said that the president displayed an "America first" attitude.

VP Pence praises Trump-Putin summit: "Disagreements between our countries were discussed at length, but what the world saw, what the American people saw, is that Pres. Donald Trump will always put the prosperity and security of America first." https://t.co/pnM34fZoCq pic.twitter.com/pPlSFVpZI5

But how, Harlow wondered, asking what America gained by Trump's "slapping" the intelligence community.

This is the beginning of a relationship between the world's two largest nuclear powers, Lotter explained.

"We have to be able to work together on longterm issues," he said.

Harlow, however, wondered why Trump refused to admit that Russia meddled in our elections. She played a clip from the Helsinki presser in which a reporter asked President Putin if he wanted Trump to win the 2016 presidential contest, and whether he directed officials to help him to victory. Putin responded in the affirmative. When confronted with the clip, Lotter noted he wasn't sure whether Putin was agreeing to his influence in the campaign, but rather he was just noting he wanted Trump to win.

Harlow immediately interrupted her guest to tell her producers to play the clip again, despite Lotter's protestations.

This is in no way akin to that, argued Harlow.

Look at what Trump has done, Lotter suggested. The U.S. has enforced new sanctions against Russia and has expelled diplomats, and is working with the intelligence community "to harden up the systems to make sure they can’t influence future elections."

"We are sending a strong message" to Russia, he said.

Lotter also reiterated that Russia's supposed influence in the U.S. election did nothing to change the outcome.

"Probably a lot of other countries also meddled," Lotter said. "I’m not comfortable with their influence campaign," but "no votes were changed."