Here's Why the HHS Couldn't Reunite a Dozen Children at the Border... 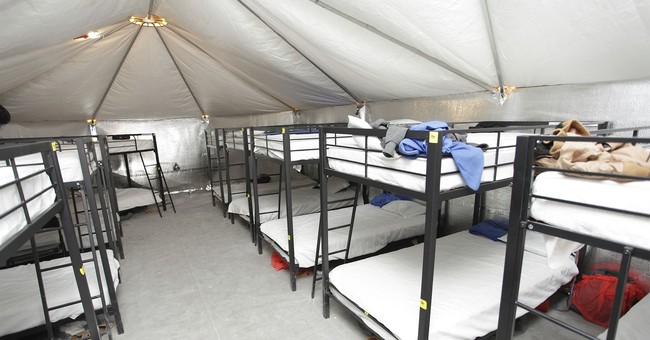 While outrage abounds over the HHS's inability to reunite families at the U.S.-Mexico border, some context is necessary. Despite what some may think, the agency does not have sinister motives here. A dozen of the 46 young immigrant children who were separated from their parents were unable to be reunited with them because the adults were deported and chose to leave their child in U.S. federal custody, an ICE official explained Thursday, according to the Washington Times.

The dozen adults "had the opportunity to bring the child with them" when they were given removal orders, but opted against it, Matthew Albence, executive associate director for U.S. Immigration and Customs Enforcement's Enforcement and Removal Operations, told reporters during a call Thursday.

The ICE official said adults left the kids in U.S. federal custody because they knew they would eventually be placed with sponsors and wanted the kids to grow up in America.

"Their goal when they paid the smuggler and these cartels $5-6,000 ... was to get their children here. So if they have to go back on their own, that's fine because that was their goal in the first place," Albence added in a different call Wednesday.

HHS Secretary Alex Azar defended the agency's process at the border this week.

“It is one of the great acts of American generosity and charity, what we are doing for these unaccompanied kids who are smuggled into our country or come across illegally,” he said on CNN.

Still, the protests against Trump's immigration policies are louder than ever. First it was progressives and those on the far left. Then liberal mayors. Then the calls to abolish ICE reached Washington. Rep. Marc Pocan (D-WI) introduced legislation to make it happen, before Sen. Kirsten Gillibrand (D-NY) said she wants the agency to go away too.

Republicans are currently trolling their Democratic colleagues by pledging to bring the radical bill up for a vote.

A federal judge has ordered the Trump administration to reunite children with their parents by the end of the month. They asked for an extension.