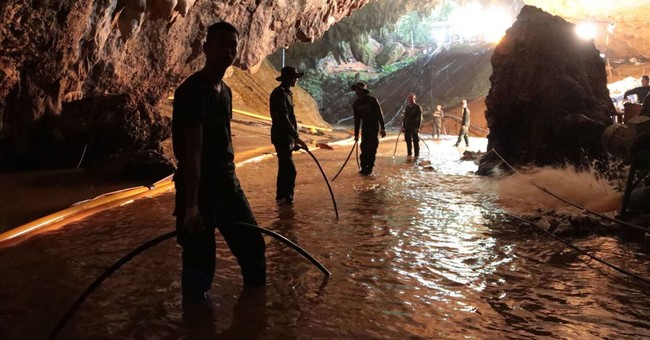 The rescue effort at the Tham Luang cave complex has been nothing short of miraculous. Eight boys have now been pulled from the cave, after having been trapped by floodwaters for two weeks. Four boys and their assistant coach remain underground. The mission is paused for 10 hours so oxygen tanks can be replaced.

To bring the boys to safety, scuba divers have led them through narrow passageways, often in pitch black conditions. Four boys were rescued on day one of the mission, another four on Monday. All of them were brought immediately to the hospital because of their risk of infection and malnourishment. They are expected to be held in isolation for observation for five to seven days.

Experts have noted that the divers have brought the healthiest and strongest boys out first as a way to give confidence to the remaining boys.

A fifth boy who was evacuated from the cave in northern Thailand has arrived at a hospital in Chiang Rai, to join his four teammates already inside. pic.twitter.com/LZps1E9mMx

The path to safety is so treacherous that a Navy SEAL died last week trying to navigate it. The brave man, 38-year-old Major Saman Gunan, died bringing oxygen supplies to the boys. He is being remembered as a hero, especially by his fellow SEALs.

"His determination and good intention will always be in the heart of all SEAL brothers," the Thai Navy SEALs wrote on Facebook. "Today, you get some good rest. We will complete the mission for you."

President Trump commended the rescue workers and encouraged them to keep it up.