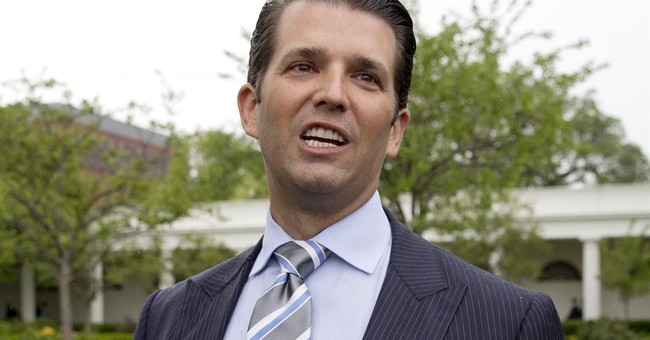 Statement from @DonaldJTrumpJr in response to transcript release pic.twitter.com/3DkrAqbPJQ

The Senate Judiciary Committee has just released over 2,000 pages of transcripts from their interviews with Donald Trump Jr. regarding the meeting he had with a Russian lawyer at Trump Tower in 2016 - a meeting critics have used to try and prove collusion between Russia and the Trump campaign.

During the interviews, Trump Jr. admitted that he agreed to meet with lawyer Natalia Veselnitskaya based upon the recommendation of music manager Rob Goldstone.

"In his e-mail to me Rob suggested that someone had official documents and information that would incriminate Hillary Clinton and her dealings with Russia and that the information would be very useful to the campaign."

Trump Jr. agreed to the meeting because he thought any information about a presidential candidate's "fitness, character, or qualifications" would be worth the time. "I should at least hear them out," he told investigators.

Yet, their conversation ended up being of no use and largely focused on adoption.

"My skepticism was justified," he said. "The meeting provided no meaningful information and turned out to be not about what was represented. The meeting was instead focused primarily on Russian adoptions, which is exactly what I said over a year later in my statement of July 8, 2017."

At one point in the interview, Trump Jr. said he did not speak with his dad about the meeting.

"I chose not to because I didn't want to bring him into some thing that he had nothing to do with," he said.

You can read all the complete transcripts here.

As Senate Judiciary Committee Chairman Chuck Grassley (R-IA) said upon the document release, "Americans can now review this unfiltered information and arrive at their own conclusions.”