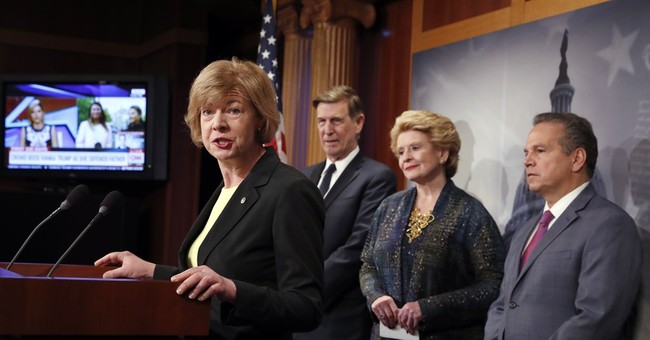 Sen. Tammy Baldwin (D-WI) has long targeted federal judicial nominee Gordon Giampietro. President Trump nominated Giampietro to serve in Wisconsin's Eastern District. Yet, the nominee's past comments about marriage have put him on Baldwin's radar. In 2015, for instance, he argued that the Obergefell vs. Hodges ruling, which legalized gay marriage, was "not really legal reasoning" and stated that it was “irrefutable” that children are best raised by a man and a woman. State Senator Leah Vukmir, who is challenging Baldwin for her Senate seat, sent the incumbent a letter in March insisting she not let politics hinder the confirmation process.

How dare the senator employ her "anti-Christian bigotry" against a judicial nominee. That's not the founding fathers' way, Vukmir added.

Not only did Baldwin, who is the first openly gay person to serve in the Senate, double down on her campaign against Giampietro, she made her resistance official this week, deciding to withhold her blue slip from the Senate Judiciary Committee.

"Since his nomination, it has come to light that Mr. Giampietro failed to disclose a number of past statements during the nominating commission's consideration of his application which call into question his ability to serve as an independent, fair and impartial jurist who will respect precedent," Baldwin wrote President Trump.

Baldwin also alluded to Giampietro's questionable qualifications and temperament. She urged the White House to instead consider the recommendations of Wisconsin's Federal Nominating Commission.

Democrats have been obstructing Trump's judicial nominees for months - a trend the Judicial Crisis Network is shedding light on intheir new ad, "#GridlockReform." Democrats are "obstructing and playing games" with Trump's nominees because they want to protect liberal judges who are "hostile to religious liberty," the group charges.

Despite the Democratic obstruction, Trump has managed to approve circuit court nominees at a record pace. That's not going to slow down, Senate Majority Leader Mitch McConnell pledged Thursday.