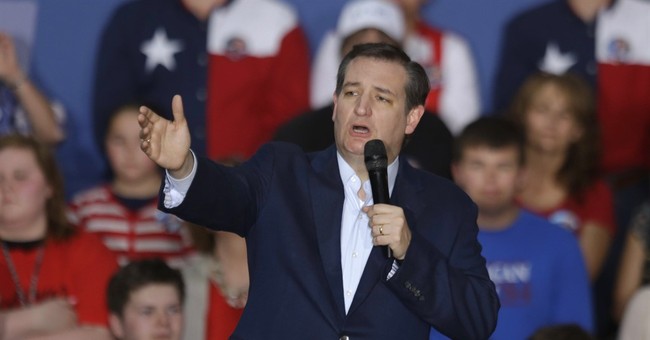 Sen. Ted Cruz, speaking at a rally in Knightstown, Indiana on Tuesday, acknowledged that Donald Trump was about to have a successful primary night in the Northeast.

“The media will say Donald Trump is the Republican nominee,” Cruz said.

You don’t have to look further than the USA Today’s front page, Cruz said, to figure out why. Holding up Tuesday’s issue, Cruz pointed out a survey that revealed 40 percent of GOP voters "doubted" they’d vote for Trump if he’s the nominee.

Cruz noted it isn’t just the media who want to see Trump as the Republican nominee.

“Donald Trump is the one man on Earth Hillary Clinton can beat,” Cruz added, before teasing a “major announcement” about vice presidential picks.

“Hillary has picked Donald Trump as her vice presidential nominee,” he said. Trump, Cruz continued, shares Clinton’s desired functions of the federal government, including having control over education.

If the media is correct, he said, both the Republican and Democratic nominees are going to be New York liberals.

Cruz may have ceded the Acela primary to Trump, but he eagerly noted that his campaign is about to head to more favorable terrain. In Indiana, polls show he is almost even with the businessman. The Texas senator may also get a bump from his pact with John Kasich, the latter of whom said he is effectively pulling out of Indiana to give Cruz a clear path. Yet, Kasich complicated matters by telling voters they should still vote for him.