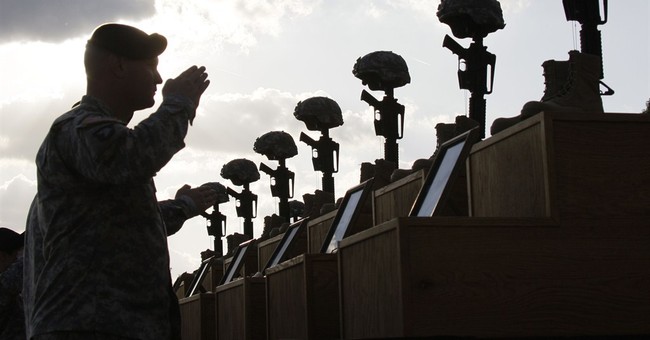 It had been a long time coming. Because of the Obama administration's audacity to define the 2009 shooting at Fort Hood Army facility in Texas as "workplace violence" instead of terrorism, the victims and survivors did not receive the Purple Hearts they deserved. Until today.

Today the military awarded the victims and survivors of the 2009 Fort Hood attack with Purple Hearts and other medals, after a more than five-year-long bureaucratic struggle over whether the awards were deserved.

Police Sgt. Kimberly Munley, who helped thwart the attack, along with murdered civilian Michael Cahill, were also honored with Defense of Freedom Medals.

For those who don't remember the bloody episode, Major Nidal Hasan opened fire on soldiers at Fort Hood in November of 2009, killing 13 people and injuring another 32. One of the murdered victims was pregnant.

When committing his heinous act, Hasan reportedly screamed, "Allahu Akbar!" ("God is great.") Afterward in court, he also declared he was defending the Taliban. Yet, despite his proud announcement, the military decided to classify this Al Qaeda-inspired attack as mere "workplace violence." This meant that Fort Hood victims could not receive their Purple Hearts.

These brave victims are finally being recognized - five years too late. Yet, some think these victims deserve much more than medals. Sen. Ted Cruz (R-TX), for example, has demanded that the Pentagon provide them with financial benefits. He said as much on "Fox and Friends" on the Fox News Channel Friday morning.

“It is outrageous and indefensible. One of the reasons we fought so hard to pass the legislation to require the purple hearts to be awarded is precisely so that these soldiers get the benefits they deserve. I intend to reach out to the Secretary of Defense personally. Enough games! Five years is far too long. We need to acknowledge the heroism of these soldiers.”

I couldn't agree more. These soldiers have an absolute right to the Defense Department benefits. Yet, based on the government's track record, they may be waiting another five years.