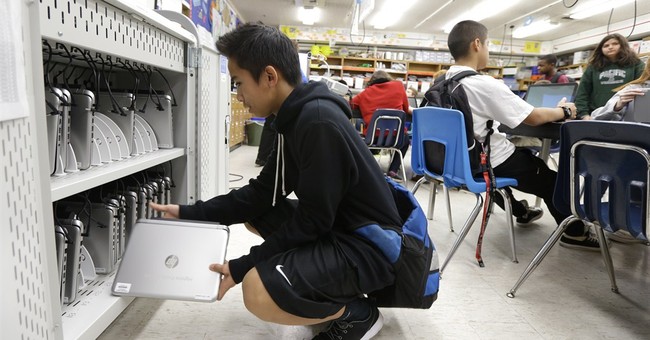 The threat of failing may no longer be such a consequence for underperforming students in some Virginia schools. Why? School administrators in the city of Fairfax are prepared to ban zeroes to spare students’ feelings.

In Montgomery County, students cannot be given a score lower than 50 percent “unless they did not actually do the assignment or put in effort to do it,” said schools spokesman Dana Tofig. In Loudoun County, the grading practices regarding zeros varies school to school, said spokesman Wayde Byard.

Starting as early as this year, grades in northern Virginia could have more of an emphasis on “classroom effort,” and less on actual test scores, according to the report.

In addition to eliminating zeroes, schools could also allow students to turn in corrections on incorrect test answers.

Some perks! If I knew I could simply redo all my work, I wouldn’t have spent nearly so much time studying the first time around. This is the likely mindset many students will adopt knowing about the relaxed repercussions. Back in middle school and high school, when my teacher put my completed test on my desk with red ink that announced my grade, I knew it was permanent. Now, that red ink doesn’t even have to dry by the time students can apply the whiteout.

Some people believe this is in the student’s best interests.

Education consultant and grading expert Ken O’Connor said movements to standardize grading systems are picking up steam. He also said that giving students a zero is “morally and ethically wrong.”

“As soon as a kid gets even one zero, they have no chance of success,” O’Connor said, noting that the student has to then achieve perfect results to recover academically.

I have two words for Mr. O’Connor: Ben Carson. Actually, make that three words: Dr. Ben Carson. When Carson was in elementary school, he routinely received failing grades. With his mother’s urging and encouragement, however, he turned those scores around and became one of the most renowned neurosurgeons in the world. It’s obvious that his early struggles in school pushed him to not only overcome, but to excel.

Student representatives in Virginia, however, argue that the new grading system would provide an easier path for students to get into college. That sounds nice and all, but did they consider the student’s well being when he or she makes it into a college for which they’re not qualified? After being so coddled in middle school and high school, they’d be in for quite a shock dealing with the often merciless university workloads. Oh by the way, good luck convincing your professor to give you a do over.

Students don’t need to be shielded from ‘F’s. Do you know anyone who has made it through school who did not fail at least one assignment? That doesn’t mean they’re stupid – it just means in that particular instance they perhaps didn’t work quite as hard or study quite as much as they should have. I imagine that grade did not return the next time. Failing grades are not death sentences – they’re wake up calls. They gave Dr. Carson and his mom a steely determination to succeed - and they can have the same response today.

Don’t ban zeroes, Virginia. Consider how rewarding it is for both student and teacher when those failing grades turn into perfect scores.